Wired Or of Triacs don't seem to work 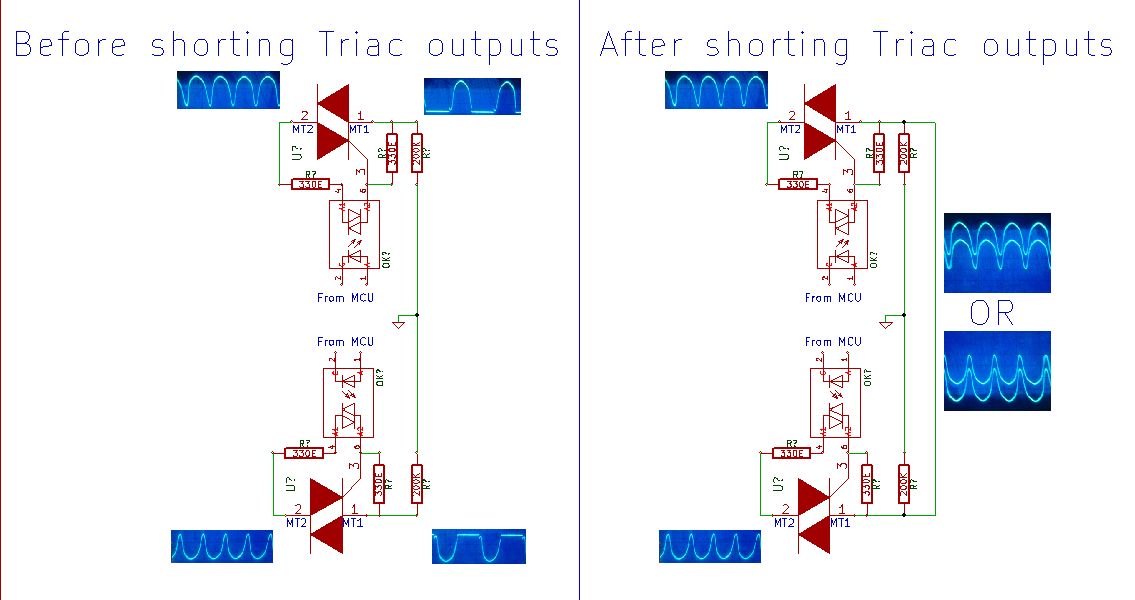 However, as long as the triac output terminals (MT1 for both) are not shorted, the signals seem fine. When I short the MT1 terminals, the waves, instead of combining to form a full sine, become a fully rectified sine instead, sometimes positive, and sometimes negative, randomly. Where am I going wrong? The double fully rectified waveform is seen because the two probes remained in place, so one signal is slightly below the other, but at the same point after shorting the outputs. My signal was a 50KHz PWm signal in the circuits above, so I filtered it before sending it into the triac, as can be seen. I could see 2 possible causes for this ocurring, the high frequency and/or a high dv/dt rate. AFter the above attempts, in order to narrow my possible causes for the ckt not working, I did this: I eliminated the 50KHz signal, and used 230V 50Hz from the AC mains. The supply in this part of the world is horrible, as can be seen by the wave shapes, but there is no choice in the matter. Anyway, I set it up like so

I isolated the signals by using two 6-0-6 step down xfmrs back to back. No difference in the outcome. The triacs simply pass the AC fully once the load is connected (220K to reference). There is a half wave rectifier that works correctly before the triacs, but after the triacs are even lightly loaded, its like there is nothing there.

So, I further dropped the input voltage down by using the first 0-6 xfmr output connected to the second xfmr 6-6 end to end, to make the isolated ac about half of the AC mains. No change seen, abd the sine wave passes as though there is no circuit at all.

Finally, I just used a single 6-0-6 as a step down, and the circuit worked as intended. I once again tried the circuit with SCRs this time instead of triacs, and it worked again, at low voltages, but not at high voltages after stepping up again 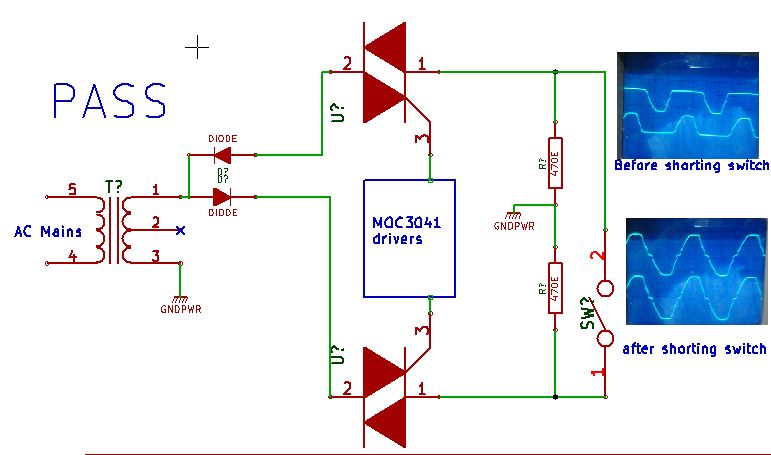 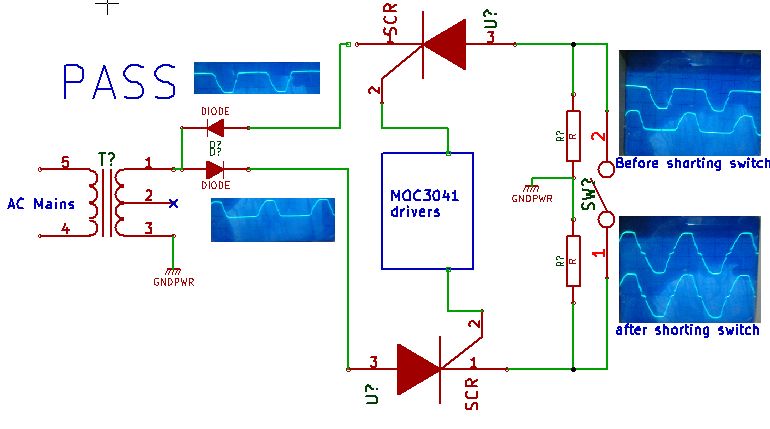 My questions now are

Without being one who can talk about it for sure, but it seems like you are trying to solve the problem by changing the main line rather than the trigger pulse, so you trigger them both simultaneously, without knowing anything about your trigger circuit, other than what the out sine wave shows.

4
Control AC load with microcontroller. TRIAC behaviour problem
0
Using triacs to switch more complex equipment than just motors and lights?
5
TRIAC turning on asymetrically by itself when it gets warm
1
TRIAC Angle of Firing vs Power Delivered to Load, how calculate?
0
Triac(s) as SPDT switch in a DC environment
0
AC induction motor controlled by TWO TRIACS. They blow down
1
AC motor control with triac or relay
2
Help for TRIAC strange behavior