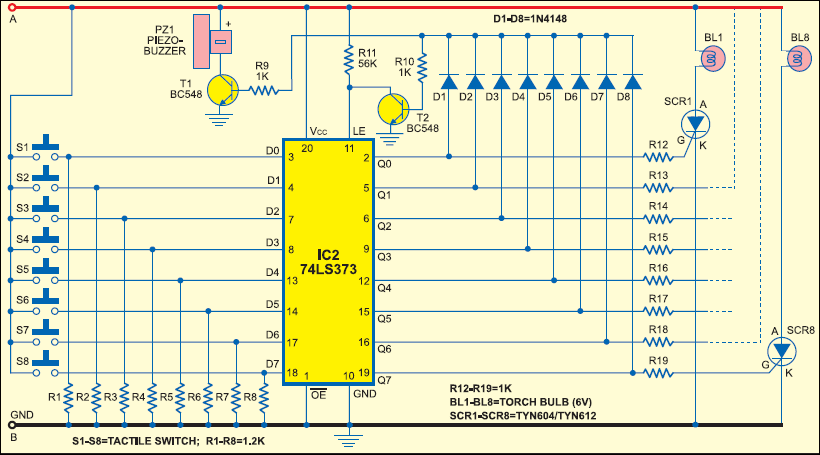 I am designing the following circuit for my college quiz club.
I have replaced the bulbs BL1 to BL8 with suitable LEDs and resistors. Now, the issue here is that given a 5V input (from a USB hub), the logic works fine, but the LEDs are very weakly lit and the buzzer doesn't produce any sound. If I power it via a 9V battery, all the LEDs glow brightly and the switches S1 to S8 don't have any effect.
To fix this, I was thinking that the buzzer and the LEDs would need their separate power supply to be activated by some transistor based switch.
Is there any way that can be avoided?

Edit:
Here is the website I got the circuit from.

You can add a small regulator such as an LM78L05 to supply all but the lamps and the buzzer. One part plus a couple small capacitors. You could use a 9V or 12V supply at the input for lots of noise and brightness (but make sure you stay within acceptable limits for current and voltage on the LEDs and piezo transducer). I suggest a small regulated wall plug adapter.

Presumably there's something else (not shown) to reset the SCRs because otherwise they will stay on until the power is cycled.

You may have damaged the 74L373 with 9V, that's well above its absolute maximum supply voltage of 7V. 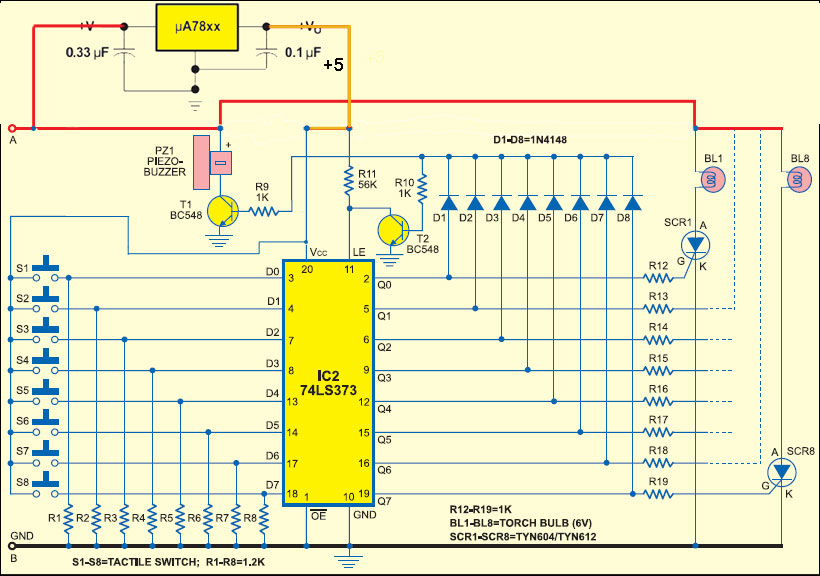 If you've tried powering your circuit from 9 volts, you have likely fried the 74LS373 and may well have damaged the LEDs. It's possible for even a seriously-damaged LED to kinda-sorta work, so you may not really know what you've got to work with until you start over with some new components.

A silicon-controlled rectifier will have a significant voltage drop, and is really not the best kind of thing to be using to drive your LEDs. I would suggest that some other circuit topology might work better.

One that might be cute would be to use a 555 timer to generate a 200Hz or so signal and feed that into a CP0 input of a 74HC4017 decade counter chip (e.g. http://www.digikey.com/product-detail/en/74HC4017D,653/568-8146-2-ND/1230369). Feed the outputs of the counter to the LEDs with a common current-limiting resistor. Also tie each output to one side of a switch through a conventional diode (the positive side toward the ouptut). The other side of all the switches should be tied in common to the /CE, which should have a weak (47K or so) pull-down.

When no button is pushed, all the lights will strobe at about 20Hz. Pushing a button will cause the strobing to stop at the corresponding light until the button is released.

Not the answer you're looking for? Browse other questions tagged latch piezo-buzzer or ask your own question.