Why are pull-up resistors not drawn this way?

So, I've always been using a pull-up resistor in the configuration that usually appears in textbooks but I can't tell why it isn't drawn in another way.

So, basically a pull-up resistor is usually used to prevent a direct connection between ground and the supply voltage when the input pin of some digital device is to be made LOW. The question is why isn't a pull-up resistor drawn as shown by the circuit on the right? In this way, there'll be no loss in voltage from the supply to the pin and there's no fear of short-circuiting the power supply.

The question is why isn't a pull-up resistor drawn as shown by the circuit on the right?

Because it won't work - the supply is directly connected to the input pin and no matter what you do with the switch, if it has a resistor where you show it to be, it won't change the fact that the input pin is wired directly to the supply.

So, basically a pull-up resistor is usually used to prevent a direct connection between ground and the supply voltage when the input pin of some digital device is to be made LOW

Nope. The purpose of a pull-up/pull-down is nothing to do with circuit protection, and is instead to ensure there is always a valid state on the pin, regardless what is connected.

Without a pulling resistor, when the switch is open, the pin is floating, and might randomly flip between low and high depending on the whims of the electrical fields around you.

For more detailed explanation, please check here. I quoted some below:

Digital logic circuits have three logic states: high, low and floating (or high impedance). The high-impedance state occurs when the pin is not pulled to a high or low logic level, but is left “floating” instead. A good illustration of this is an unconnected input pin of a micro-controller. It is neither in a high or low logic state, and a micro-controller might unpredictably interpret the input value as either a logical high or logical low.

Pull-up resistors are resistors which are used to ensure that a wire is pulled to a HIGH logical level in the absence of an input signal.

Pull-down resistors are resistors which are used to ensure that a wire is pulled to a LOW logical level in the absence of an input signal.

So no matter how you draw them, verify your drawings by removing the input signal and see if the logical level is as defined in above quotation.

Below pictures are the illustration of both types.

Note that the switch S1 and S2 serve as the input signal here. They don't have to be SPSTs, other device like BJT transistor can serve that purpose, too, such as here. 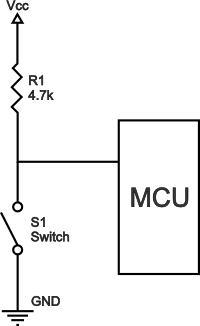 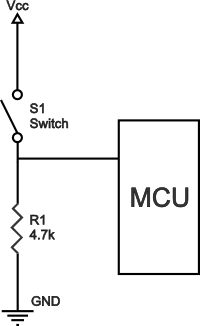 Not the answer you're looking for? Browse other questions tagged pullup or ask your own question.

16
Why are pull up resistors more common than pull down resistors?
4
Experiment with pull up/down resistors gives unexpected results
0
How Does A Pull Up Resistor In Parallel Work?
0
Enabling/disabling a pull-up with a microcontroller (and a level shifter)
6
Why would a USB-C adapter have a pull-up resistor?
0
Understanding Master/Slave trigger configuration through open-drain GPIO
0
Why is my pullup resistor more noise immune than a pull down?