It looks like the 74LS05 has "open collector outputs" (not sure what that is) and the 04 does not.

Plus, it appears the 05 is more expensive?

Can someone tell me the difference between the two and when would you use one vs. the other?

There are two general types of outputs in digital circuitry: push-pull and open-collector (OC). The latter name dates back to when BJT (bipolar junction transistors) were used in the output stage, for example TTL logic like the LS series; you will also see the nomenclature open-drain (OD) output, to reflect CMOS topology.

Open collector / open drain outputs which are in the 74LS05 also drive the output to ground for a logic 0, but for a logic 1, they leave the output in an high impedance state -- as if the pin was disconnected from the chip. 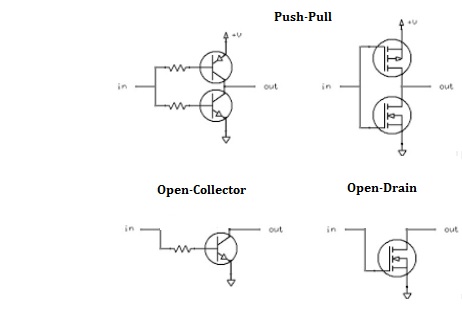 What good is that? Well it allows the output of several chips to be tied together, and they won't be interfering with each other all trying to drive the line high. One example is several devices with interrupt outputs feeding into a single interrupt pin on a microcontroller. When there is no interrupt, the line is high. How, if no output is driving it high? Somewhere there will be a "pull-up resistor" (common values are 4.7K or 10K for TTL, and higher values for CMOS) tied to system power (again typically 5v or 3.3v) to pull the line to the logic 1 level as a default.

Then when an interrupt occurs, the chip causing the interrupt will pull the line to ground. Since the pull-up resistor is a fairly high value, this will not draw very much current, about 1 mA for a 4.7 K resistor and 5V logic. The line into the microcontroller going to a logic 0 will be recognized as an interrupt -- since this is caused by the line going from high to low, this is called an "active low" signal.

This tying of several open-collector/open-drain lines together is the same as ORing them (except technically it would be done with a NOR gate with inverted inputs, which, remarkably, is the same as an AND gate) since the lines are active low. But this way you don't need to actually include the physical gate.

The 74LS05 is probably more expensive because there is much less demand for the chip. 74LS04 hex inverters are very common and sold in much higher volume.

Not the answer you're looking for? Browse other questions tagged inverter open-collector or ask your own question.

16
Open Drain vs Open Collector
2
Do you have to set the TRIS register when using open collector outputs on Microchip microcontrollers?
2
Question regarding 7402 IC
5
What does the value “Z” in the function table for this inverter stand for?
3
Difference between a 3 phase VFD inverter and UPS inverter
0
What is the difference between high and low frequency IGBTs?
0
How connect a open collector output to led and to GPIO?
0
Adapting the 74LS170 open-collector “register file” to active-high TTL input
0
Simplest way to short two leads with GPIO