I am trying to understand the Source Follower amplifier as a primitive buffer, and am running some simulations with a SPICE simulator. I have the amplifier hooked up as shown below with a current source acting as the bias for the NMOS transistor M1. 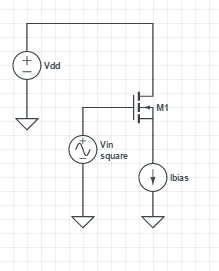 I am able to see a relatively good copy of the square-wave input on the the source leg of M1 with a slightly smaller amplitude and no phase change, which I understand is the case with the source follower (Gain less than 1.0).

In order to keep the input and output roughly centered around the same bias point, what modifications would you suggest to the amplifier? Do I need to look at resistors at the drain? Or perhaps a bias network on the gate?

It's called a source follower because source voltage follows the gate voltage but, because the device needs (simplistically) the gate biased slightly higher than the source you get an "error". Depending on what you are trying to achieve you can do nothing, rebias the output signal or apply some feedback system to equalize dc voltages.

Not the answer you're looking for? Browse other questions tagged bias source-follower or ask your own question.