How to securely solder a wire to a vibrating SMD PCB?

I have a problem with a "4in1" control unit for a RC helicopter. Due to some problems with helicopter setup, it is currently vibrating heavily which makes things even worse.

The receiver has short (say 2.5 cm) piece of wire which acts as a 2.4 GHz antenna and is soldered to an SMD pad. It is also glued to the PCB with hotglue. The SMD pas is around 2 mm away from the edge of the board towards which the antenna is supposed to point.

My problem is that after a while, the solder joint breaks and so does the glue joint and the antenna falls off. Fortunately, I haven't had any crashes due to that, but I'd rather fly with antenna than without.

So I'm looking for tips how to securely solder a wire to a SMD pad on a vibrating board. I already tried just resoldering the wire and gluing it with hotglue, but it seems that it doesn't help much.

Here's the photo of the part. The solder ball is where the antenna should be attached. I removed the layer of hotglue that was over it. Here's full size image, for those who dare click it. 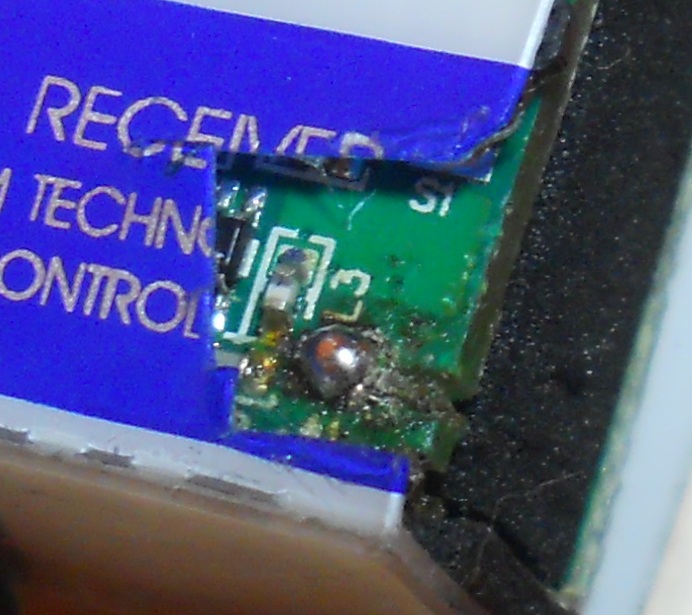 A SMD pad is not a good way to attach a wire. That should be done with a thru-hole pad. You might even want two thru-hole pads to loop the wire thru for better strength.

If the wire is vibrating a lot, then maybe a few zig-zags in the wire near the PCB will cushion or decouple the wire motion from the PCB a bit.

For better vibration performance use silicone instead of hot glue.

What kind of silicone : not acid cure, it eats the board.

I second David's idea of supporting the antenna to minimize vibrations. I would take a 2cm piece of stiff paper the length of the antenna, fold it lengthwise so that both halves are perpendicular, glue it on the housing of your receiver so that it stands up and glue the antenna to the fold.

Not for stiffness, but better soldering might help as well. If the wire has been soldered well the solder would flow up against it a mm or so, and not be a nice round blob like you have now.

I'm guessing that the tip of the antenna wire is free to vibrate back and forth, until the antenna breaks loose. I suspect the hotglue near the edge of the board is breaking first, and then the solder joint breaks.

Perhaps you could use hotglue (or superglue, or wire dots, or tape dots) on some or all of the antenna wire so it doesn't vibrate as much. Perhaps hotglue a larger piece of cardboard or plastic sheet to the opposite side of the PCB for the antenna to rest on. (Hopefully a piece of plastic a couple inches long won't be too heavy ...)

I'm sure you can invent a smaller, more lightweight shape for the card, and cut the card into that shape after the glue hardens.

Not the answer you're looking for? Browse other questions tagged soldering surface-mount or ask your own question.

7
SMD solder now or later?
0
Removing SMD connector from PCB
18
How to solder an SMD component with a "pad" on the bottom?
2
How to fix incorrect routing to SMD transistor terminals
3
SMD solder failure due to probing? How to solve it?
6
Probably overheated black color SMD pads
4
How to solder large smd components on a PCB with 2oz copper
0
Solder pad dimensions for small SMD
3
Solder SMD on through hole
1
Are all negative terminals on a PCB effectively the same?