When is it an instrumentation amplifier (In-Amp) and not an operational amplifier (Op-Amp)?

I've seen a number of different configurations for instrumentation amplifiers, including 2 opamp versions. This

is also one. But it's just a differential amplifier preceded by input buffers. When do you call it an instrumentation amplifier, in other words, what's so special about it that it deserves a separate name?

"An instrumentation amplifier is a precision differential voltage gain device [...]." One of the important words here is "gain". An OpAmp has infinite gain (in theory) and only gets a defined gain by adding circuitry around it. Usually, when using one OpAmp only, at least one of the inputs loses its extremely high input impedance because external resistors are necessary.

If you need two (differential) inputs with both a very high input impedance and a defined gain, you can use the two-OpAmp-InAmp you are talking about or the three-OpAmp-InAmp-configuration your picture shows. There are also readymade IC InAmps by such companies as Linear Technology or Analog Devices.

Common three-OpAmp-InAmps use a slightly different configuration compared to your picture to set the gain with one resistor only (the external gain resistor in the case of completely integrated InAmps). Please refer to the links I've provided for more details.

The two-OpAmp-InAmp circuit needs less parts, but at the cost of a not-so-good common mode rejection ratio (CMRR).

Here is a link to a very good book about InAmps by Analog's Charles Kitchin and Lew Counts where you can find a more in-depth look onto all these issues.

I agree with what Zebonaut said, but here are my criteria for being a "instrumentation amplifier" more concisely:

An ideal opamp has a infinite input impedance and infinite amplification. Through feedback you can set the amplification to a realistic level, but this is at the expense of the high input impedance. An instrumentation amplifier (inamp) is a difference amplifier which solves this.
There are several instrumentation amplifier configurations, this one is probably the simplest to understand:

It's a regular differential amplifier with an opamp (the one on the right), with two voltage followers to buffer the inputs, so that they are high impedance. This inamp has an amplification of \$\times\$100 (100k\$\Omega\$/1k\$\Omega\$), and you have to change two resistors to get a different amplification.
Other inamp configurations let you set the amplification with a single resistor. 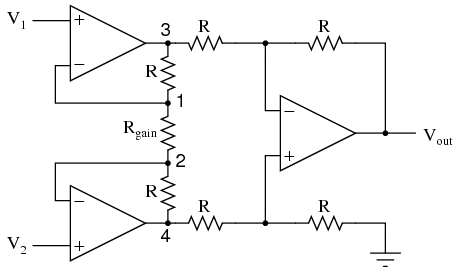