I have made a sensor which uses six IR phototransistors, three per sensor block, opposite it is a matched IR diode(940nm). This is in turn connected to a MCU.

The function of the circuit is an airrifle chronograph, the circuit generates a signal when a pellet passes over one of the sets of three transistors, thus breaking the circuit giving a pulse. Look at the first image on the linked page here.

Firstly the device is detecting an object with a 4.7mm cross section passing between sensors, the original application used an audio port and the internal amplifier and some pull ups to create a pulse for each crossing of the sensor. When I added a external pull-up and measured the voltage, only a small change was visible. This yielded results such as \$ 0.4v < VOut < 0.9v\$, which obviously will not be picked up by an interrupt. I concluded that I would need to use a compartor to give a clean signal for the input to the MCU, this would be a standard circuit with hysteresis non-inverting.

Question: How do I calculate the needed pull-up resistor to give me a voltage range of 1.5 - 3V from a 5V supply with 6 phototransistors(linked above). This will be feed into the comparator circuit.

I know that transistors can be simplified to equivalent resistors but I do not know how to determine them for a phototransistor, I am assuming one can do this so as to find a pull-up.

The datasheet for the IR led.

Here is a snapshot of the wave form from the audio port and software used to read the signal: 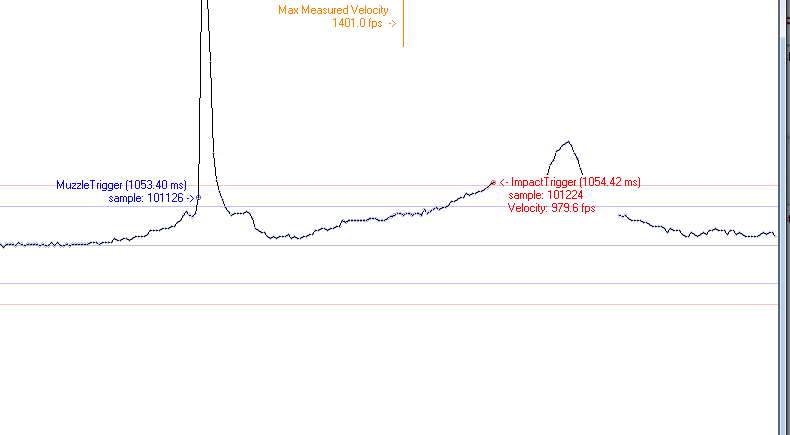 Each spike is a break of a three set sensor of the six.

Any device switching off (due to a blockage) will cause the signal to rise to about 5V. So, the basic system you have cannot be guaranteed to generate any change in signal voltage greater than 2.6 volts p-p and this is with fully illuminated devices. Should the IR diode that does the illumination not be producing a power output of at least 20mW/sq cm at the photo-transistors, the individual "on" voltages will be somewhat greater than 0.4 volts and this might be (say) 0.8 volts.

I believe you need to sort out this problem first before deciding on the value of resistor. Look at the volt drop across one of the photo-transistors (not in the group but separately powered via a load resistor) and see what it is when illuminated.

I'll also add that the data sheet is not very helpful when it comes to stating what the "illuminated" collector current is - there seems to be several figures and no explanation of what conditions these different figures apply to.

It's hard to know what you are really trying to do since your circuit makes no sense. Some issues:

As with using any electronic part, you have to actually read the datasheet of the part, then use it accordingly in a circuit. The datasheet should tell you, among other things, what the reverse leakage will be for various light levels.

Not the answer you're looking for? Browse other questions tagged sensor pullup phototransistor or ask your own question.

5
combining phototransistors
9
Phototransistor transimpedance amplifier
12
Is \$I_e = I_c\$ for phototransistors?
0
LM311 Pull Up Resistor
0
Pull up/ Pull down resistor
12
Pull-up resistor clarification
2
Simple, cheap and robust light gate for use in schools
1
Issues using an Ultrasonic Sensor with Raspberry Pi
0
Sensor range and speed based on resistor
2
Multiple phototransistors one OR output