I'm currently working on a little project using a Raspberry Pi and an Ag9000-S. I've got it working using Mode A (phantom power over the data pairs) and Mode B (direct power over unused pairs), but when using Mode A I can't use the data pins for Ethernet communication because they're cranked up to ~48V, and Mode B isn't implemented on some of the switches I have around. Is there a way to bring the voltage back down to a normal ~2.4V for Ethernet communications? I know I'm not exactly an electrical engineer, but any information would be useful!

Both the Ethernet switch and the device (your RPi in this case) have a transformer at every input & output wire pair. This transformer is normally a 1:1 signal transformer providing galvanic separation.

Power over Ethernet in mode B works by connecting the power supply DC to the unused wire pairs:

In mode A, it works by connecting the power supply DC to the transformer center taps:

This way the signal and the power are mixed onto the wires at one side by the transformer, and separated at the other side by the other transformer. The common mode DC voltage level of a single pair represents the power transmission, and the differential voltage level represents the data. Since the data is mixed onto the wires with the power, you cannot simply connect your power consuming module to the individual wires, as that would interfere with the communication. To decouple the power without disturbing the data communication, you have to use a center tapped transformer. The standards-compliant solution is to connect the power module input to the transformer of the device. However, this may not be a trivial task if the device is a product containing an RJ45 socket with integrated magnetics, not prepared for PoE, as those center taps are normally not present externally in this case.

Replacing the RJ45 socket on your device with a different one (prepared for PoE) is most probably not the way to go. What you could do instead is put another set of transformers in between the device and the Ethernet switch, and decouple the power from the center taps of those transformers. Such a device is usually sold under the name PoE splitter, sometimes with a DC-DC converter included (for example).

These pictures show only the power connections, and several details are omitted (the different EMI chokes, the termination resistors, etc). Those should also be present in an actual implementation.

I don't know how it works but it works even if it is clearly not safe.

Here is a capture from the Raspberry Pi Schematic v2.1 as on the official website. You can see the Ethernet RJ45 jack with the integrated magnetics and terminations: 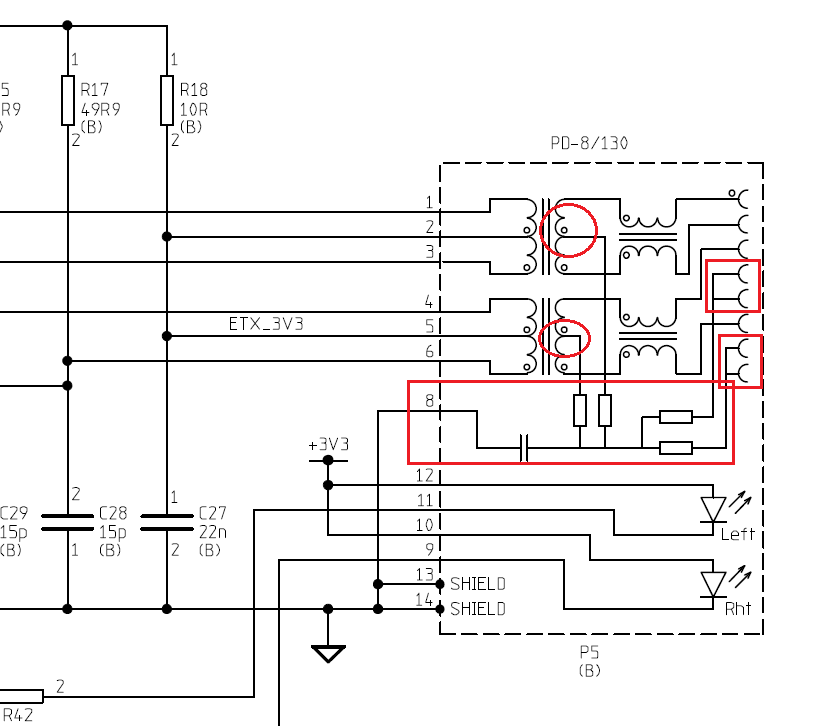 I'm assuming you haven't connected anything on the left side as this is the components side and 48V will break everything.

Mode B should work more or less because there is no transformer on the pairs, but you are lacking serial capacitors before termination resistors. These capacitors are used to block DC part between each pairs.

But you use only mode A and putting the DC voltage directly on the wires of each pair is not the same as putting it on the center tap of the transformer (red circles). And as you don't have access to the center tap of the integrated magnetics, you won't be able to use Power over Ethernet with the RJ45 port of the Raspberry Pi.

At the beginning of this Application Note from TI, you have some information about Power over Ethernet and Ethernet magnetics which are PoE capable. Also on this schematic you have an example of Power over Ethernet with the same type of magnetics design as the Raspberry Pi one (but in a discrete kind and not integrated in a RJ45 port) : http://media.digikey.com/photos/rdl/tps23754evm_420_schematic.jpg

Not the answer you're looking for? Browse other questions tagged raspberry-pi poe or ask your own question.

3
How can I tell which alternative is used in PoE?
2
High Voltage Non-Standard Common Mode POE
2
RS-485 bus with PoE bus
2
In PoE: is alternative A compatible to all PDs?
1
POE power will not interfering on Data travelling on Ethernet , Whats the logic
0
Parallel PoE injector from pc psu?
0
How to reduce voltage with no earth?
1
PoE design to support both Mode A and B