If I have three button cells in series, and one of them dies, will the whole circuit still function at a lower voltage or will it stop flowing?

If I wire three button cell batteries in series, their voltages should be summed. Now, if a battery dies, let's say BAT3 for the sake of example, will the circuit operate at 6V or will it stop working? I would assume, due to the way series circuits are defined. that it would stop functioning, but then I realize that a battery is conductive, making me think that current would still flow, just at a lower voltage.

Which scenario would happen? I've provided a simple circuit diagram below. 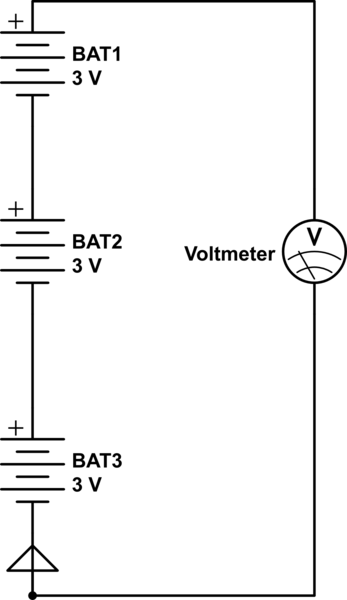 The circuit will continue to function at reduced voltage. Note that the voltage declines over time. It does not suddenly drop to zero. Normally, you want to remove the load from the batteries before any one cell drops to zero volts, because the other two batteries will force the dead one to discharge to negative cell voltage. This "reversed" cell may then leak electrolyte in the battery compartment (depending on chemistry and construction details). If you plan to do this, you should consult with the cell vendor to make sure it will not cause leakage or other problems.

Most of my experience is with 1.5V alkaline cells and rechargeable Lithium polymer cells, not with button cells.

You can also test it by putting a discharged cell in series with two strong cells, then discharge the series stack until the weak cell reverses.

There are other failure modes too important in real circuit (for example, if BAT3 internal resistance rises heavily; it might still read 9V, but be unable to give enough current to power device you will put instead of voltmeter, etc).

(also note that in real life that will not be 6V/9V but less, as there is voltage drop on that diode, and your cables might have some notable resistance too if long enough, etc.)

Not the answer you're looking for? Browse other questions tagged voltage batteries series cell-battery or ask your own question.

2
How do I calculate the total quiescent device current draw for eight years if the the device had a 20 µA quiescent current?
3
How to avoid/reduce heat for three 1W LED's?
11
Single terminal of voltage source attached to earth ground
4
Can someone clarify how to charge a battery without an off-the-shelf battery charger?
2
Lithium Battery Pack - Do I need BMS within parallel connections?
5
Battery operation
0
Arduino Circuit Debugging Methodology
1
Waste heat in battery pack - large pack vs small pack?