I have come across the following site: Passive Band Pass Filter - Electronics Tutorials.

It is a tutorial about band passive filter circuits. The following formular is given with:

I get an extremly small value for my capacitor, even with resistors of low resistance. Should the capacitor then just be leaved?

Of course you don't omit the capacitor. If R is 100 ohms then C = 4pF for 400MHz. A capacitor that small is commonplace at VHF and UHF. But, for a bandpass filter I'd be looking at using inductors, capacitors and resistors to get a sharper rejection of unwanted frequencies. It all depends on exactly what you require of the filter.

This interactive calculator allows an RLC bandpass filter to be simulated like this: - 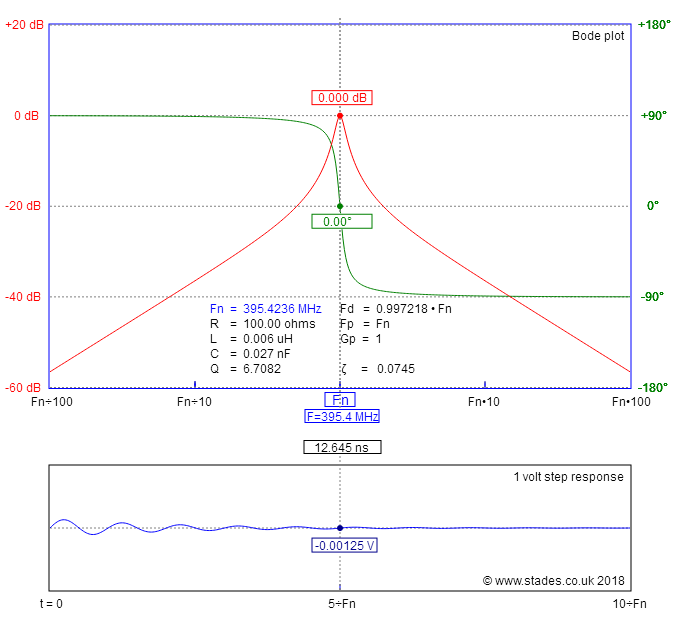 The value for the capacitor is 27 pF and the inductor is 6 nH.

At first, you should know that the bandpass circuit as shown in the reference is the worst you can ever think. More than that, the formulas given in the tutorial apply only if both corner frequencies of the bandpass are not close to each other (in the example, as shown in the tutorial, it is a factor of 50 between both characteristic frequencies).

The best performance can be achieved (a) with a passive RLC combination or (b) with an active filter structure (bandpass in S&K or MFB topology). In the latter case, you need an opamp with a gain-bandwidth producht that is larger than the desired center frequency by a factor of 20...50 (at least).

Not the answer you're looking for? Browse other questions tagged rf filter radio or ask your own question.