Why print a PCB module on ceramic?

This is what I am talking about (click to enlarge): 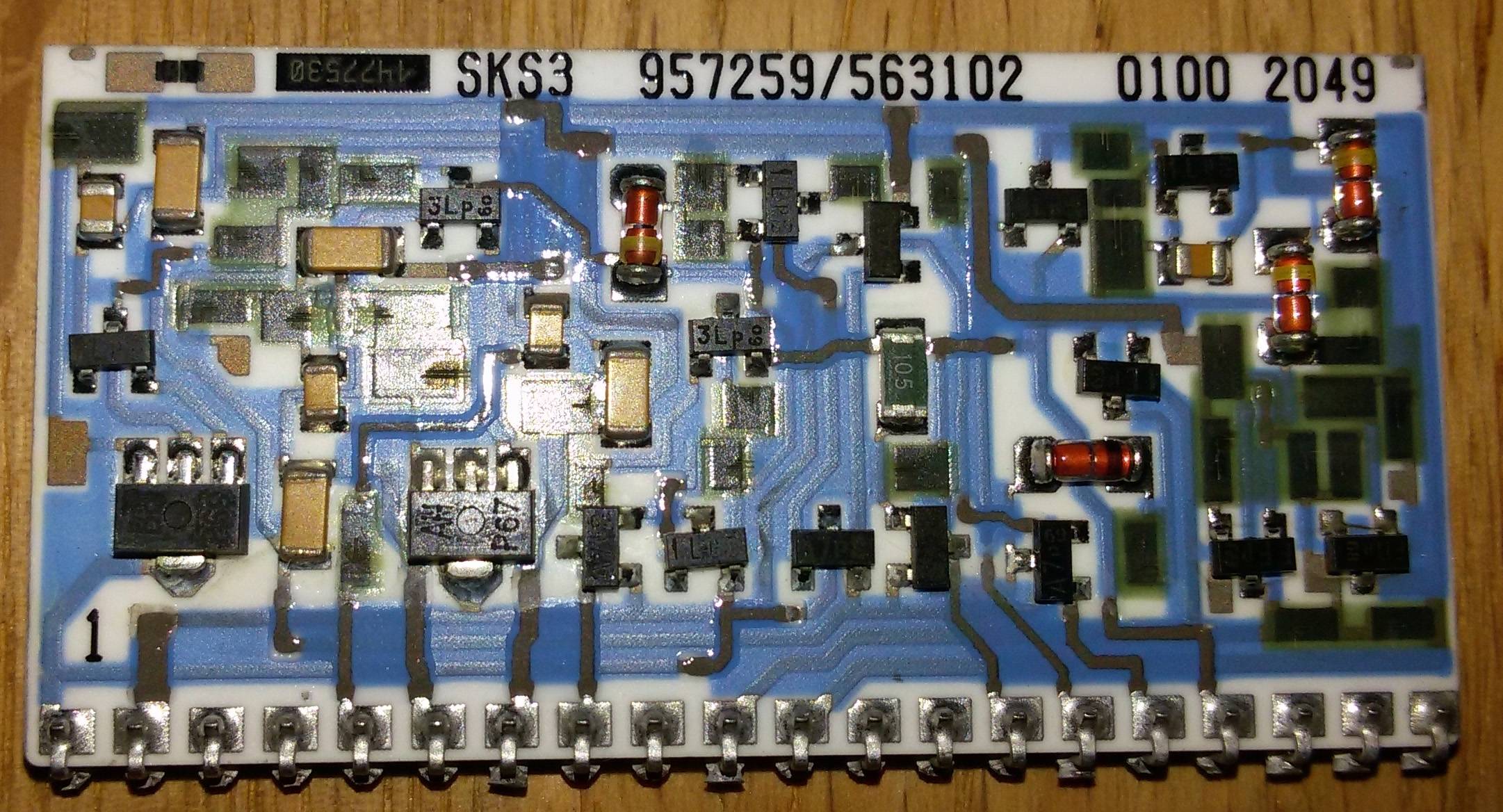 It is from an old (1990s) telephone system. There were multiple lines, some digital, some analogue, and in the output stage these modules (double sided) were standing (in a slit) on the main PCB and soldered to it (with the pins you can see).

There were a couple of other sub-PCBs on this thing, but only those were of this ceramic type. So the question is: Why are those printed on ceramic?

It seems that the traces will have higher resistance and the overall building cost for unusual PCBs is often higher than for established processes. On the other hand, this looks like a multilayer, and the other side is a multilayer too, which made me think if this is cheaper than a "real" four-layer PCB (since it has no vias). But then some of the modules (unfortunately I cannot remember anymore which of those was for digital and which for analogue lines) only had one side populated.

This is a relatively inexpensive method of construction if you are making tens of thousands of units. This is / was known as a "hybrid module" or "ceramic hybrid module".

Note that all of the resistors are screen-printed on the substrate (dark rectangles). Also note that they can do multiple layers of conductors because they print insulating layers between each of layer.

Finally, because the resistors are exposed, they can trim each resistor before the final protective top coat is applied. That makes this type of construction extremely attractive if the circuits require precision trimming. You will see the trim as a laser cut in the resistor body - the cut is usually in the shape of a "L". The short leg of the "L" is the initial rough trim, the vertical part of the cut is the fine trim.

I used to see this type of construction a lot for precision analog filters and telephone hybrid (2-wire to 4-wire conversion) networks.

This is a snapshot in the evolution of surface mount technology. In the midish 1980s, people were desperate to increase circuit densities. Existing technology was chip and wire hybrid, where IC die were mounted and wire bonded to thick-film hybrid substrates. The hybrid substrates were usually Alumia. About the only surface mount parts were ceramic chip cap, and then later ceramic (thick) film resistors, and also those funny looking cylindrical diodes.

So that the ICs did not have to be wire bonded, at first die were taken and mounted into ceramic leadless chip carriers (LCCs). There was a lot of concern about thermal expansion and leadless mounting, so the safest approach seemed to be using ceramic everything. Then the first SOIC packages started to appear for active parts with low pin counts.

Some of these sorts of SIP ceramic boards were used in power circuits too. In that case thermal conductivity was also an issue, so BeO substrates were sometimes used. BeO is fine as long as is remains a ceramic, but given the high power and voltages some of these could see in use, sometimes would be damaged. The BeO could be released in power, which is toxic.

In addition to the answers already provided, I think that the superior thermal and mechanical characteristics of ceramic versus the other typical materials were the reasons for using it for this application.

Not the answer you're looking for? Browse other questions tagged pcb printed or ask your own question.

1
Perpendicular tracks in 2 different layers (PCB)
2
How to solder PCB?
7
What is this small unconnected solder blob on this PCB?
1
How to reduce ADC noise through PCB routing?
11
Will copper pour help on my single-layer PCB?
2
Four Layer PCB Design
0
PCB 6-layer stackup problem