I would like to use a LiIon cell recovered from an old laptop to power my bike light (a bulb one, 2.4W 6V).

I thought about using an opamp controlling a MOSFET to avoid overdischarge (MOSFET ON for Vbatt>3.1V), and also an opamp to signal when the battery is almost drained (LED ON for Vbatt<3.2-3.3V).

As DC-DC step-up I used a small board meant to be used for phone chargers and I measured an output of 4.8V with the load connected. It is way lower than the nominal 6V of the light bulb, but this is a minor issue, since I can easily swap that circuit with another one.

The circuit is (of course the LM7805 is a placeholder for the step-up board and also my MOSFET is different: a BUK556-60A I had lying around):

My problem is that the LM358 (or the TL081 I have at home) is not rail to rail and apparently its output cannot put the MOSFET in saturation. For example, I measured on the breadboard the following values: 3.48V Vbatt, 3.17V threshold for the comparator OA2 (it was not 3.1V as I wrote above) and 3.9V on the gate of the MOSFET (and on the output of the opamp) resulting on a drop along the MOSFET of 0.8V.

How can I prevent overdischarge of the LiIon battery without losing almost 1V on the switch I have to place inevitably somewhere? A NPN transistor would not change the situation much, I think.

This circuit technically doesn't prevent the batteries to drain, but it will light up the LED when charge is low and will stop the bike like altogether when the battery is almost empty, resulting in me being forced to charge the batteries.

I didn't show in the circuit the physical switch I plan to use to disconnect the batteries completely when no light is needed.

Maybe this will help: 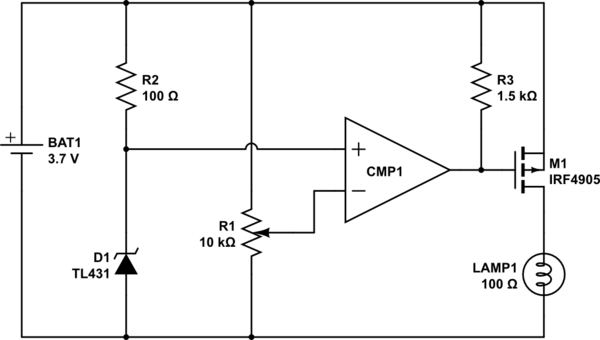 Tweak the pot until the comparator go low only when battery voltage is high enough.

There are a few things that you can do to improve your circuit.

1) Get rid of the 7805 regulator. Because your input voltage is way below the drop-out voltage of the regulator, all it is doing is introducing a voltage drop to the rest of the circuit.

2) Use a low-power voltage reference. For something that is fairly non-critical, I use a standard red LED with nominal forward voltage of about 1.7V. The temperature coefficient of the LEDs that I use is about -1 mV / degree C but this will vary depending on who makes your LEDs. Nonetheless, it should be sufficiently accurate for your purposes.

The red LEDs that I use are in a water-clear plastic package and are really quite efficient - they produce significant light at a current of about 0.5 mA. This allows the LED to be both the voltage reference as well as a (dim) power-on indicator. Pick the LED resistor for about 0.5 mA current and see how well it works for you.

3) Use a low-current op-amp. The LM358 that you are using isn't bad but there are inexpensive CMOS op-amps that consume one-tenth the current that the LM358 uses. That said: if the LM358 is all that you have, it will work.

If you are stuck using the LM358, add a 10k or so pull-up resistor from V+ to the output. That should bring your output swing close to the input power supply rail.

4) This is the most important step: use a better FET. There is a class of MOSFETs called "Trench FETs". These have very low gate threshold voltage and very low Rds on values. They go by a variety of names but the word "Trench" is usually in there somewhere.

For example, Digikey shows more than 7700 listings for the search phrase "Trench FET". The cheapest N-channel device in stock in a through-hole package costs $1.22 in singles and is rated for 54A @ 40V max. Rds On is less than 12 milli-Ohms.

This circuit won't really prevent draining the batteries. I suggest a solution involves 1 power PMOS, one NPN BJT, one Zener and a few resistors. Make the BJT conduct and pull the gate of the MOSFET low only when Vbatt >= Vz+Vbe. 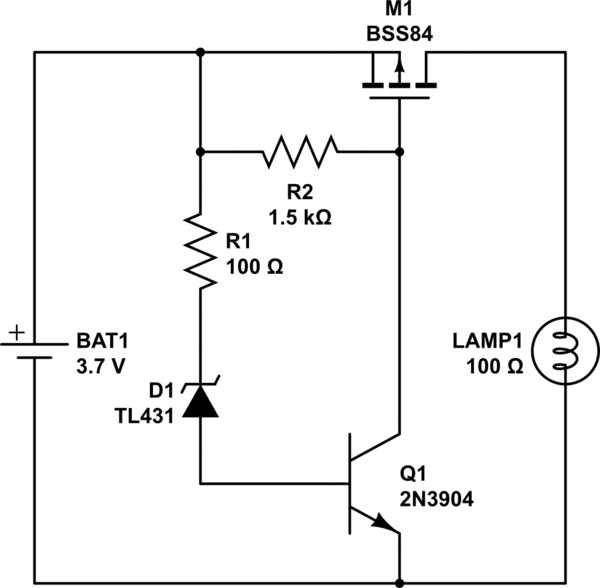 You may end up needing a charge pump for the gate, if you leave with the NMOS.

Use an npn bipolar transistor.

If the problem is that the opamp being used as a comparator is not rail to rail and you can't get enough gate drive, use it to instead drive an npn with an emitter resistor. This will allow you to use drive the gate at the voltage rail minus VCE_SAT.

If instead the problem is that the VGS threshold on the FET is just too high, select a different FET with a lower threshold.

Not the answer you're looking for? Browse other questions tagged operational-amplifier mosfet lithium-ion comparator or ask your own question.

0
Why MOSFET transistor doesen't do the switching?
0
Single cell Li-Ion battery - cascaded double protection?
0
How can I keep this MOSFET in cut-off when Vcc > 5.5V?
1
PIR sensor (HC-SR501) with n-Mosfet transistor not switching off
1
Selecting the power source for load using MOSFETs only?
3
MOSFET failure (RN6020JNZ4) - all pins shorted
0
MOSFET switch not stable
0
Li-ion battery overcharging