I have put together this circuit from parts I had lying around, It is to invert a normally closed momentary switch to behave like a normally open. The switch is for a car and toggles a tail light.

Even though the operation is correct the N-Channel is getting very hot, (too hot to touch) worst when the switch is open.

Can you help with this ? Thank you

Remove the N-channel, you have no use for it. They're describing digital logic circuits where you are driving cascades of logic elements and the input impedance/resistance of the next stage is very high. In your case, you have a relatively low impedance of the next stage (tail light) probably being in the 100s of ohms tops. So your output will drop to zero automatically and rapidly without the NMOS at all.

Another potential issue with your circuit is the 3 Mohm. This is going to cause a very slow drop in the gate voltage causing very slow turn-on time for the PMOS. With the redundant NMOS also turning off really slow at the same time, you have a good chance that you've burned both your PMOS and NMOS and that's why you're seeing the 120 ohms across your pulldown rather than the 3 Mohm. Your NMOS is partially shorted now so you definitely want to chuck that part.

Your circuit as it stands would probably work if you had a much lower (say 1-10k pulldown) which would prevent the PMOS and NMOS from turning on too long at the same time. You allowed them to turn on "forever" with the 3 Mohm which causes a direct short from the top of the PMOS to the bottom of the NMOS as they transition from one state to the next.

Summary:
1. Remove NMOS from circuit.
2. Decrease your pull down resistance to 1-10k ohm.

I agrre with horta.. Just discard NMOS ...Find the wattage of the tail lamp bulb assembly.. if it is filament it would be around around 15 to 25 watts and normal current would be around 1 to 2 Amp. The on state resistance of PMOS would be 0.1 to 0.2 ohms device dessipation will be around 0.5 watts. If the tail lamp wattage is still higher you may have to fix the the device on a hetsink. pl. let me know.Connect 22K(0.5 watt carbon ) resitance between gate of the PMOS device and negative supply and 1 K res. between gate and positive. Best wishes. V T Ingole

The other answers have the correct idea for what the problem is, however there is an alternative solution where you remove the PMOSFET and keep the NMOSFET. This assumes you can use a low-side switch. 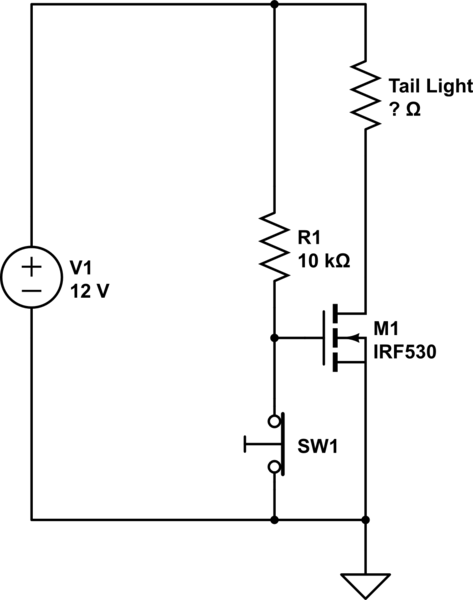 This has a slight advantage that NMOSFET's typically have lower on resistance. However, this is difficult if the the tail light is grounded to the chassis.

Not the answer you're looking for? Browse other questions tagged mosfet not-gate or ask your own question.