How do I choose a fuse? Fusible Links vs Polyfuse?

I realise this is an extremely broad subject area but I need to know how to choose a fuse to protect a circuit.

Recently, a cheap PSU of a friend's blew up quite spectacularly (the two primary MOSFETs blew up - dead shorts.) It claimed 400W but on the PCB said 235W (more lying power supplies.) Despite 235W being approximately 1A at 230Vac, it used a 5A glass fuse. Why so over-rated? The fuse, however, was blown during this, so the fuse did do its job. The plug fuse did NOT blow up.

On my Super OSD project I am trying to protect a circuit which uses 455mA max. I am using a 500mA polyfuse. Does similar advice apply to polyfuses? Would I need a bigger polyfuse?

Fuses are a difficult subject. A 5A fuse may remain intact at 7A but blow at 6A. It all depends on how the current pattern is in time. In the glass cylindrical fuses there are fast types (marked "F", actually for the German word "Flink"), which will blow if the rated current is exceeded even for a short time, and there are slow-blow fuses (marked "T", from the German word "Trage"), which will withstand short surges. Most power supplies will use the latter, as they will cause a current peak when switching on.

Self-repairing fuses like PolyFuse are PTC devices whose resistance will rise to very high values if they heat up by a too high current, but they never are a real interruption. When they cool down they will conduct again, and the circuit may operate again, provided the cause for the tripping is removed. Because it has to react to heating a PolyFuse will have a certain resistance, much more than a glass fuse. The size of a PolyFuse will not only depend on its current rating, but also determine how fast it will react. It should be clear that an 0805 part will react faster than a 20mm diameter disc.

edit
A graph will show how different PTC fuses are from metal wire fuses: 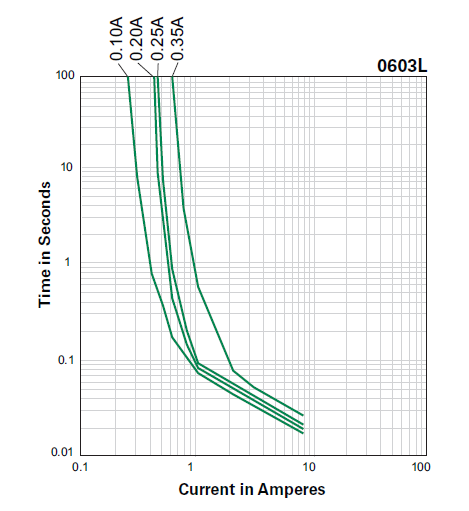 If there's an overcurrent the resistance will rise, reducing the current (1/10th second) quickly to 1/10th of the value, after which the current still will decrease, but much more slowly, and there will always remain a current; you don't get a complete interruption. This is for the small 0603 size SMT version. A radial version like the 600R reacts much more slowly (10 seconds to go to 1/10th of the current), so it's clear that the PolyFuse won't really protect against short-circuits: by the time the current is reduced to a safe level several components may be fried.

What kind of fuse you choose should depend on what you want to protect against. If it's excessive current due to a component defect you don't want a self-repairing device, you want to stop the product working until it has been repaired. (In this answer I explained why this type of fuse shouldn't be user-replaceable.) For a power fuse you don't pick a PTC. OTOH, if high current peaks are normal in your product, but you don't want to over-dimension your components to cope with it, a PTC may help.

Fuses are often rated for twice or more than maximum normal operating current. This is for three reasons. First, the fuse is meant to protect against something catastrophic, usually a short. A real short will draw many times the expected operating current in most cases. Second, you want some margin. You don't want the fuse tripping just because the device was at its intended current for a while, and that current was maybe a little high due to parts tolerance, line voltage, or whatever. Third, even in normal operations lots of devices will have temporary high current transients. For example, a motor takes a lot of current to start, a old fashioned LEB (light emitting bulb) can draw several times its rated current for a few milliseconds before it reaches operating temperature, and a power supply can have a initial current transient as the output capacitor charges up.

Some fuses are "slow blow", which are specifically designed to ride out current above their rating for a little while. This is for devices where the normal transients can take more than a few ms or 10s of ms.

As for the polyfuse, check the datasheet carefully and see what the resistance is at your intended current. You might not like the voltage drop you get accross a 500mA polyfuse at 455mA. Also think what you are really trying to protect against. If something in your device fails and it draws 750mA, do you really need the fuse to shut off? Something already broke, so the fuse isn't to protect the circuit most of the time. It's usually to keep the thing from catching fire and burning someone's house down. I don't know what your device is, but if drawing 750mA isn't going to substantially heat it, then you probably don't need the fuse set so tightly. My first knee jerk reaction is to start with a 1A fuse if you are expecting 455mA, but I don't know the details of your device.

You should have three currents in a Poly fuse:

Most that I've seen have much wider spacing than you are allowing. For example, if your circuit pulls a max of 455mA, then your current trip should be slightly above that, but your current hold should handle that.

Looking at a PTC that has a hold current of 400 mA, it has a trip of 800 mA and a max current of 40A. If you design too close, you will be tripping during normal use.

If 455mA is absolute max that your circuit can handle, but it normally operates at 200mA, then a fuse with a trip around 500mA will probably work. If your normal operation is closer to 455mA, you might need to allow it to handle more current before tripping without damage.

Most fuses, especially polyfuses, should generally not be relied upon to protect circuits from damage other than catching fire, except those which are capable of withstanding currents hugely above those they would normally handle. Often by the time a fuse pops, whatever was supposed to have been switching the current will be destroyed, and the fuse will be the last thing in the circuit which is still capable of interrupting current. Better than starting a fire, but still not great.

If it's necessary to protect circuits from damage, it's usually better to use a combination of current-limiting and thermal fallback in the primary switching elements. Note that current-limiting alone is often only sufficient in low-voltage applications, and thermal fallback alone is only sufficient when something is known to limit the current (I've seen motor driver chips that claimed to be "thermal overload protected" light up like road flares hot enough to fuse the power and ground planes underneath them, when supplied by a 20A supply and connected to a dead short). Also, even when current-limiting and thermal fallback mechanisms exist, a fuse should still be used if a spontaneous shorting failure (e.g. from ESD) might cause a fire. Fuses often aren't good for much beyond preventing fires, but they can be effective in that role.

Not the answer you're looking for? Browse other questions tagged safety protection fuses polyfuse or ask your own question.

8
When should you use a fuse?