How do I build a DC time out circuit that stays off until power is toggled?

My girlfriend bought an LED faucet that is actuated when you turn the water on and is powered by a battery pack of 4 AA batteries (2 wire out). 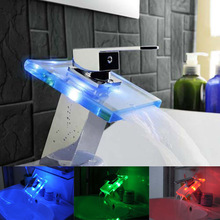 However, when the water is turned off, the slope of the faucet is rarely sufficient to overcome the surface tension and the faucet remains on. How can I build a timeout circuit such that the faucet turns off after being lit for 5-10 minutes and stays off unless water is fully cleared from the faucet and then the faucet is turned on again?

A friend of mine recommended a 555 chip, but after looking into it it seem the faucet would just turn off after 5 min, then turn back on 5 min later and keep cycling indefinitely.

I tried searching this site and came across this question that seem similar, but can't figure out how to deal with the fact that the activation of the circuit would work more like a toggle switch than a push button.

Yes, a 555 would do the job. The 555 can work in a number of ways - the one you are looking for is called "Monostable". This triggers once on the press of a button and turns itself off after a certain amount of time. Nothing happens until you press the button again.

Replacing the button with a capacitor effectively gives you a single press of the button at power-on time and nothing after that.

Something along the lines of (though I haven't tested it of course): 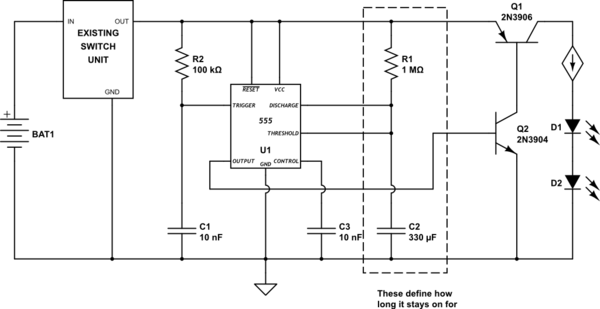 By the way, this circuit was inspired by: http://555-timer-circuits.uk/operation/one-shot2.html

Not the answer you're looking for? Browse other questions tagged dc timer toggle-switch or ask your own question.

14
Shutdown Controller for Raspberry Pi in a car
0
Is there anything wrong with this particular timer circuit utilizing 555?

3
Power Off Delay circuit
2
shutting off power to circuit after a short time from an alarm clock
1
Turn a METAL HALIDE BULB On/Off in 1 minute Intervals?
1
Momentary to Toggle Switch for Tiny Application
1
wiring a 3 position toggle switch for two devices?
0
ATMega2560 timer not increasing again after overflow
1
Power Latching Relay off/on in response to 12V ignition and 1 second ground pulse
0
When power removed from LED circuit LED stays on
0
Is there a toggle switch that returns to default state on power off?
1
How to constantly power an LED circuit normally controlled with a momentary switch?