Mosfets cooled with Heatsink and fan?

For my circuit, I have mounted heatsinks to my mosfets to dissipate heat. I have below a crude drawing of how the heatsink/mosfet is placed on the PCB 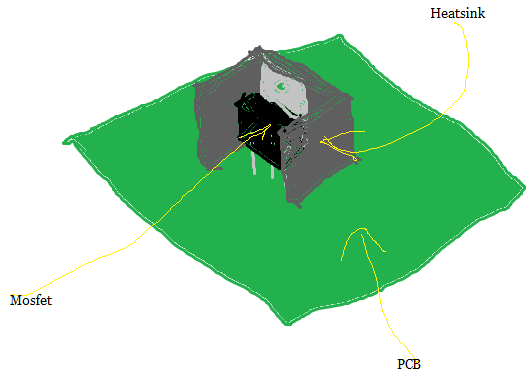 My question is, can I place a fan in some way that would cool off the mosfet/heatsink? If so, how? I was thinking to place the fan on top to suck air from the heatsink and blow the heat upwards? 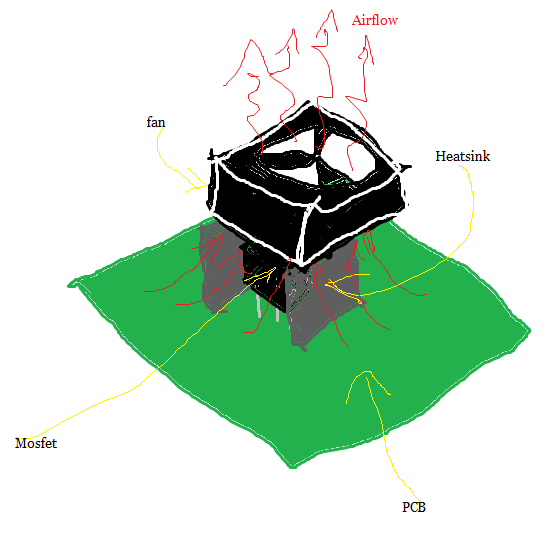 Would this work? I don't think placing the fan to blow at the mosfet/heatsink would work since the heat would just dissipate into the board?

Would my mosfet/heatsink placement even allow for an effective fan to be placed?

UPDATE: So my design for placing the fan above the heatsink should work from what I'm gathering. Though I am still unsure of where I should direct airflow.

ALSO: As I am using an LM35 for temperature sensing, should I place the LM35 so that it's touching the heatsink or the mosfet itself? Which would be more effective implementation for temperature reading?

And well, roughly you could say that the amount of surface area will allow better cooling. In combination with the amount of air flowing through/against it.

So that it will have the most possible contact with cool air. I'm not sure what your implementation is. But I'd suggest to try passive cooling. It really helps a lot, won't cause any noise or 'waste' energy. (Cooling with a fan might increase the current over the mosfet and thus backfire you?) Also, if it gets too hot for passive cooling (probably) something is wrong with your implementation.

So yes, it will work, it's effectiveness will vary on the exact implementation. But it 'should' not be neccesary to use active cooling (with a fan). The mosfet heatsinks on ebay look pretty promising and are way easier to implement and cheaper than an extra fan+temperature sensor.

That will certainly work. Just how WELL it will work depends on the heatsink and the amount of airflow you can generate. If you have the ability, a shroud to concentrate the airflow and produce a higher air speed at the heat sink will improve performance.

8
Effective MOSFET cooling
22
Dissipating 1W on a TO-220 without heatsink?
2
is CFM additive?
29
Why aren't CPUs cooled from below as well as above?
2
How efficient is a Peltier TEC1-12706 and TEC1-12715
1
Why does a Peltier cooler heat up when cooled by ice?
1
Heatsink design, factors to consider?
1
Will mounting the hub of a fan directly above a heatsink have a big impact on thermal performance?
2
Gap between heatsink and external plate – help filling this void