I always thought about current traveling through a wire much the same way marvels would travel inside a hula-hoop (all moving at the same time from one end to the other).

In this simple scenario, there is only one voltage source (only one differential of potential) that is fixed (never moves) and electrons flow in and out from that immovable voltage source. 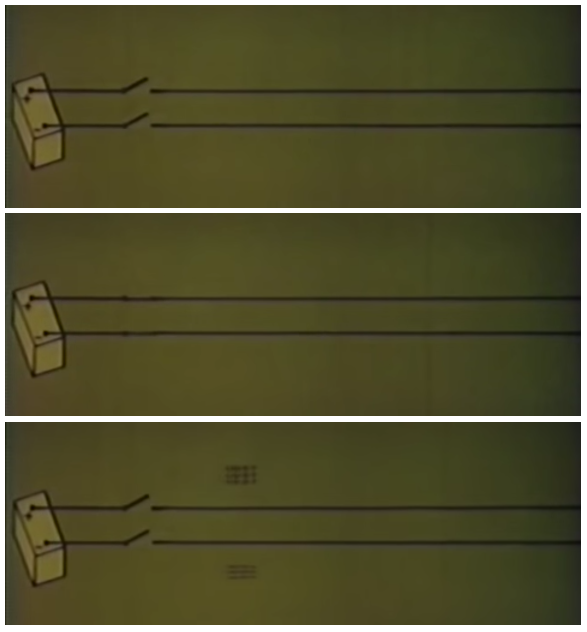 The last illustration shows what I think is the infamous voltage traveling wave speeding along the transmission line.

So here are a couple of questions that are driving me crazy:

At this point it should be evident that I have no idea what I am talking about! So what I am looking for is to gain some basic intuition regarding what is going on here!

Thank you very much for your help.

This is a really good question and one that is misunderstood by many.

one key is to realize that it is not electrons that are traveling down the line, its actually a CHANGE in the electric FIELD that is traveling down the line. The electrons themselves travel at a much slower rate as the wire is made up of molecules in a crystal structure, and the electrons bump into other molecules and electrons all the time. The field pushes them in a general direction but they do not move at anywhere near the speed that the field moves.

if you remember basic physics, an electric field exists between any two points that have a voltage difference between them. The strength of that field is dependent on the material that fills the space between those two points.

A good analogy is a wave in water. Start with a smooth water surface. Drop a rock in the middle. A wave propagates from the rock drop point outwards at some speed. The individual molecules of water do not travel with the wave. They mostly just move up and down as the wave passes by. they will probably move a bit in the direction of the wave, but much slower than the wave is actually moving.

There is also an analogy for how the wave in water bounces off when it hits a wall, which is like an open circuit in the electric case. But I'd have to go look up the analogy for a short circuit and a well terminated line!

One more analogy: you can think of a transmission line as a series of capacitors. as the field propagates down the line you are charging each capacitor, one after the other. in the process of charging them, some current must flow from one wire to the other until the capacitor reaches the field voltage. The actual value of the capacitor, and the resistance the current sees is entirely dependent on the physical makeup of the structure: the spacing between the wires, the dielectric material in that spacing, etc. so based on the change in voltage (delta V), you get some current to flow to charge the capacitors (delta I) and therefore you can calculate an equivalent resistance from ohms law: delta R = delta V / delta I. this is called the characteristic impedance of the transmission line, also referred to as Z0.

In free space and with wires that are far apart, you reach a limit of about 120 ohms for Z0. In PCB's it is common to have lines that are between 30 ohms and 70 ohms, based on the width of the PCB traces, the spacing between them, and the PCB dielectric material between them.

I know this is getting long and wordy, but when the field finally gets to the end of the line, it finally sees what is there. This is a boundary condition that the field must react to. if its an open circuit, then no current will flow at the end of the line between the two wires. BUT there is this delta I that's been happening, and because of the inductance of the line (I know i haven;t mentioned it yet but there is inductance there as well) the current can't stop immediately, so it kicks to the opposite voltage which causes a change the electric field, which then starts to propagate back down the line IN THE OTHER DIRECTION!!! When that change in field hits the original source, it sees some impedance and reacts accordingly and changes the field voltage again which propagates back to the end, and so forth and so on.

If there is a resistance across the line at the end which matches the Z0 of the line, then it perfectly matches the delta V and delta I that is coming down the line and no change in field results so there are no reflections. that is what is called a perfectly terminated transmission line.

You can go back to your marbles analog. It's beneificial, since it contains many "aha" experiences which reveal the behavior of electrical transmission lines.

First, improve the marbles so they better match an electric circuit: pack them in solid with no gaps allowed. Then add more marbles to the tube, so theres immense force compressing them all around the tube: thousands of pounds. Finally, make the tube far longer, perhaps a few miles. Squeeze it into an oval "race-track" shape, so it looks more like two parallel pipes. And of course make it frictionless, so it matches zero-ohm ideal conductors.

Now whenever you push a couple of marbles and cause the entire marble-chain to start moving, you'll see waves. The first marble will lessen the force on the one behind, which moves towards it. This happens in sequence, with each marble "pulling" the previous one forward as the large compression-force gets slightly less. Also, that marble which you pushed ahead, it pushes on the next, which pushes on the next, each moving forward from the increased force.

A pair of extremely fast waves are flying out from the location of your hand. These are of course sound waves, moving at the speed of sound in glass (assuming glass marbles!) The wave propagating backwards against the motion of marbles is a low-pressure wave, while the one propagating along the forward-moving marbles is high pressure.

Specifically, if the marbles started out unmoving, and then you grabbed some and forced them ahead, then these two waves are "startup waves." After each wave has passed, the marbles are moving. Before the waves arrive, the distant marbles don't yet "know" that you're pushing on their chain. Similar waves occur when you grab the moving chain and force it to stop. Waves issue from the location of your hand, one wave flying backwards along the chain, and one flying forwards. The marbles far away are still moving, but then the "stopping-wave" arrives, and they halt.

Finally, think about what the marble-pushing feels like. When you grab marbles and push, you encounter a big inertia, and you're performing work, as the fast waves start all the marbles into motion. You're experiencing the "line impedance." It feels just like friction, even though these marbles are frictionless. Now wait for the waves to circle the hoola-hoop and return. When they hit your hand, suddenly your hand gets yanked forwards! Your hoop is a short-circuit, so as the waves pass the far end of the loop, they're "reflecting" as the positive wave passes into the opposite return-pipe, and the negative wave passes into the other pipe. (Let go of the marbles at this point. You'll see them keep moving, but with repeated jerks as the waves pass around and around the loop.

Finally, sit down and measure the apparent friction experienced when you try to set the marbles in motion. Find the force and marble speed, and calc the friction. Now, add a frictional brake to the marbles at the far end of your "two wire loop." You've now taken the value of line-impedance and then placed a termination-resistor at the far end; a resistor with the same value as compressible-marble-column impedance. Now, if you jerk the marbles into motion, there will be no returning waves! A resistor having the same value of line-impedance? It's also the same value required to frictionally-absorb all the marble-waves which strike it.

Homework problem. :) Put a blockage at the far end of the loop. Clamp those marbles so they cannot move. Now, what happens when you force the marbles at your end to start moving?

All of the above involves mechanical waves (sound waves) on a belt-type power transmission. The "work," the energy being transmitted, turns out to be the same thing as sound waves.

When we switch to the electrical version, we discover that 2-wire transmission lines are just "drive belts" made of movable charge, where the tension or compression "is voltage," and the motion of the marbles "is current," ...and the sound waves in the solid marbles have become electromagnetic waves moving at the speed of light. The line-impedance is there, but rather than being caused by marble weight and compressibility, is coming from inductance and capacitance of the conductors. Line-reflections behave the same in both setups.

The major difference between tube-of-marbles and an electric circuit is that the charges in electric circuits don't just push upon their immediate neighbors. Instead, fields from each charge will reach out to push upon millions of other charges in the wire ahead and behind. If you "grab one electron" and push it ahead, you're always causing EM fields to spew out of the wire surface, and forcing million of electrons ahead and behind to start moving too. In wires, the forces can "leapfrog" over many inches of empty space, rather than having to travel through a chain of neighboring charges, as with the column of frictionless marbles. That's why the wires operate at the speed of light, rather than at the speed of sound. And that's why the actual energy of a circuit is flowing in the fields in surrounding space, and not inside the "drive belt" as it does with the marbles.

Not the answer you're looking for? Browse other questions tagged voltage current pulse or ask your own question.

2
What happens to the electrons of semiconductors?
1
voltages in transmission lines
1
Voltage transmission
0
Confused on voltage potential
1
Current flowing in an open circuit to make it the same voltage
0
Fundamental Questions about Voltage and Resistance
1
Open termination, signal propagation, transmission lines
4
What is actually being measured in this video showing "excess AC voltage" in the human body?