Would output signal affect input signal when the opamp is saturating?

I have learned that opamp would be saturating when the output signal is too large.

My question is would the saturating output affect input signal, for example, change the amplitude of the input signal, cause input distortion or anything else? Thank you!

Yes, in any case where there is feedback that touches the input (many cases such as inverting amplifiers, Sallen-Key filters and so on) and the source impedance is greater than zero (all real cases), you will have some effect if the output saturates.

The simplest example is probably an inverting amplifier- say you have a gain of -1 with two 5K resistors, and a source impedance of 100 ohms.

When the amplifier is not saturated the input "looks" like a 5K resistor to ground, so the voltage from the source (taking the internal resistance into account) is simply 5000/5100 times the unloaded output voltage. So it's attenuated by ~2% but no distortion if the amplifier output is following exactly. Now if amplifier saturates, it appears as a 10K resistor to the saturated output voltage, so the slope of the output increases a bit (to ~1% attenuation) and you have a point of inflection and some distortion. 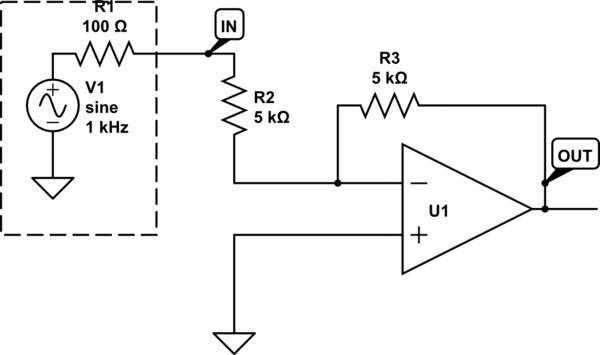 Or it could be an intermediate stage that saturates first, causing loading on the input stage, pulling the bias off, and causing "input distortion".

It could even be that your output distortion is pulling down the power lines, and causing supply interference.

Not the answer you're looking for? Browse other questions tagged operational-amplifier saturation or ask your own question.

0
Battery directly connected to input of unpowered opamp. Will the input current drain the battery?
1
Increasing precision of a practical opamp circuit when the input signal is very small
3
Opamp output at high frequencies
5
Turning the output of an opamp into a square wave
0
Do signal input, signal output and dual supply ground reference connect together at some point?
1
Opamp outputs high DC finite voltage when input signal is low
0
Unexpected opamp output
1
Opamp output sinewave is distorted
8
Opamp noise: When is a resistor in the signal path?
1
Opamp input offset voltage when saturation