Can I use LM324 as a Schmitt trigger?

I need 3 opams for a circuit. One for amplification, one for level shifting and one for sharpening badly shaped pulses, For the last part(pulse sharpening) I want to use a comparator/schmitt trigger. Can I just use LM324 for all since it has 4 opams inside or I need another IC?

A Schmitt trigger is simply a comparator with some positive feedback.

You can usually use an op-amp as a kind of comparator (some are better than others) and add resistors to get positive feedback. Op-amps generally don't make very good comparators in terms of speed especially (they can be much better than purpose-built comparators in terms of precision). The reason for this is mostly that op-amps are deliberately slowed down (compensated) with an internal capacitor to make them stable with feedback. So, they behave quite sluggishly to a fast-changing input. Also, many op-amps, of which the LM324 is not one, do not behave well with much differential input voltage applied (they may have a relatively low input impedance if the differential input voltage exceeds a diode drop or two). This is not normally much of an issue for op-amps, but for comparators it can be. Also, some op-amps will drift slightly in offset voltage when a relatively large differential voltage is continuously applied (with a time constant in the months or years).

For a ST, if you're simply feeding back the op-amp output for the positive feedback, then the output voltages of the op-amp when "railed" form your reference voltages. This is imprecise, especially if the op-amp is not rail-to-rail output (the 'high' from the LM324 for example) so you have to evaluate if that's good enough. Switching more precise voltages for the feedback is not that much more difficult, if necessary.

Bottom line though, if you need a rise and fall time of <100ns to clock a counter, and to be able to follow a 1MHz input, a normal op-amp is probably not going to cut it.

A Schmitt trigger gate effectively has the positive feedback built in (usually different sizes of MOSFETs rather than resistors for CMOS logic), saving components and allowing quite high speed, however the specifications as to trigger points and overall hysteresis are usually quite loose. If you want something that will trigger on at 3.00V+/-5mV on the rising input and off at 2.00V+/-5mV on a falling input, you'll need something more precise than a ST gate.

You can make most op-amps act like it has Schmitt trigger inputs by adding hysteresis. 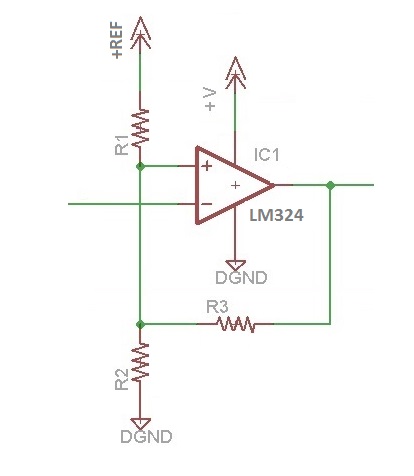 The advantage here is you can set the trip points to be anything you like. They are controlled by the three resistors R1, R2, and R3. Here is the formulae used:

Vs is the reference supply. Vh is the upper threshold, and Vl is the lower threshold.

Here are the same formulas suitable for input to a spreadsheet if you want to experiment with the values:

6
Operational amplifier as a comparator at high frequency
0
Can we declare Schmitt triggers to have memory? Can we call their output levels states?
3
Circuit analysis on op-amp with no negative feedback

0
Easy circuit for "nested" triggering
3
Is there any bidirectional IC with on/off state?
0
How to make the LM339 IC source current on its output pins instead of sinking current?
1
CMOS Schmitt Trigger: contradictionary information
0
power on power off pulses to two seperate controllers
0
Questions regarding a comparator circuit coupling to an analog switch
0
Replace an inverter and a MOSFET with an IC for 3v3 to 5v level shifting?