I need to put a circuit into a pen to turn on and off an LED using 3 AG3 or LR41 batteries connected in series. The LED will be on the tip of the pen and the switch will be on the side surface of the pen. The smallest switch I can found is DPDT Micro Push-On Push-Off Switch but it's too protruding.

Many circuits I found need mcu, transistor, and capacitor. Those circuits still take up too much space for this tiny application. Some use a 555 timer chip, but apart from taking too much space, it also consumes some power when the LED is turned off, so it's not good for this battery-powered application.

Then I bought several pens which uses a momentary switch to toggle LED on and off. They have laser diodes too actually but it's not a problem.

Then I tore those pens' case to see the circuits they use. What I found are these circuits: 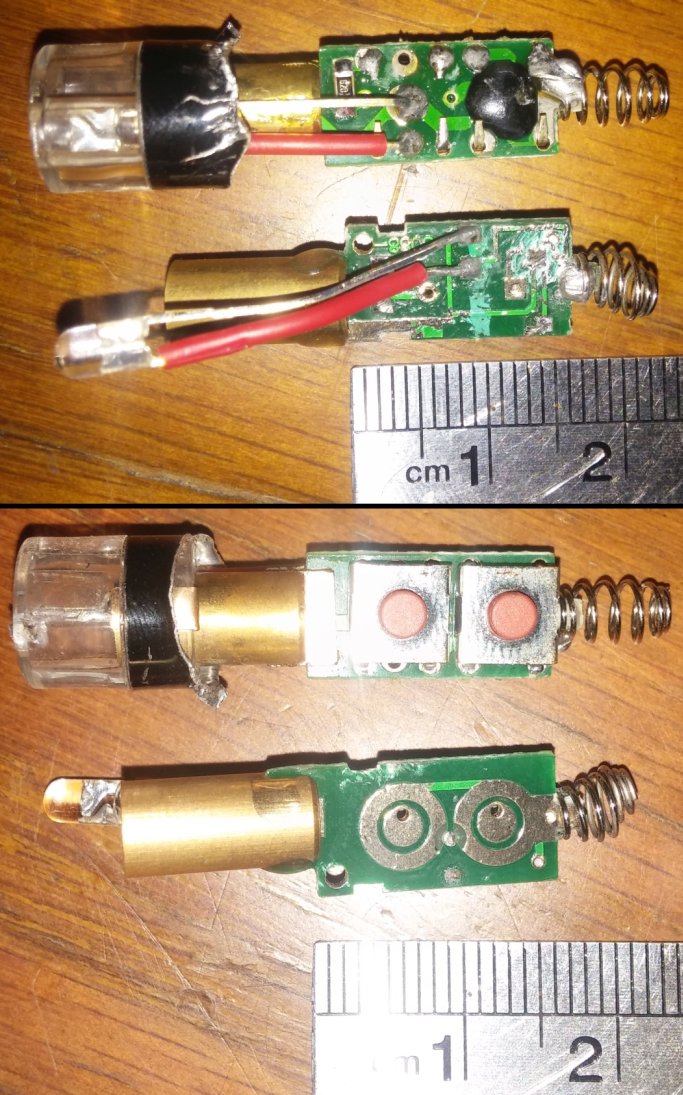 There's a lump in each circuit. One pen's circuit has a white lump (which I have corroded it using a cutter so it looks rough), and another pen's circuit has a black lump. I haven't done anything to the black lump. Those lumps are at the back of those momentary switches toggling LED on and off. The other switches are just there to momentarily turn the laser diodes on.

After I corroded the white lump, I found no discrete component in it (no discrete capacitor, transistor, nor mcu).

The circuit which has a white lump that I have corroded is the one that has UV LED and a white LED. The one shown in the picture is the UV LED. Its white LED cathode is connected to that terminal directly above 1,5 cm in the ruler in the upper picture, and it's anode is connected to the metallic case.

Do you recognize those lumps?

Believe it or not, that black lump is epoxy covering an integrated circuit, probably a small microprocessor. These are often caseless chips, just the IC die glued to the PCB with fine wires between the pads on the chip and PCB.

Many microcontrollers can be put into a deep-sleep state where they draw just a few microamps, so little so as not to significantly affect battery life. They spend all of their time in deep sleep until someone presses the button, which is connected to an interrupt line to wake it up.

There is a classic circuit that converts a momentary push-button input to an alternate-action toggle function. It requires two inverters, 2- resistors, 2- capacitors, the push-button. Depending upon how much output current you require, you may also require an output buffer transistor.

The dual inverter is available in a 6-lead SC70 package (very small) and the passive components could be SMT devices in 0603 or smaller packages. The result is a very tiny circuit.

The smallest SMT passive parts that I like to work with by hand is 0603 but 0402 isn't that much harder - it just takes more magnification, more care, more time.

The dual-inverter chip that I'm suggesting is from Fairchild but there are other suitable part numbers available from several other manufacturers. The Fairchild part is NC7WZ04. This particular part is rated to handle up to 24 mA.

Not the answer you're looking for? Browse other questions tagged led switches toggle-switch or ask your own question.