Several months ago i made a 10Amper power supply with 5 outputs, each output has a fuse holder for crystal 10A Fuses, they work as intended but its a chore to replace them every time i short them, i found this "10A reseteable fuse" however what are the chances of this relacing the glass fuses with no drawbacks at all?,

Power guy here. Nothing, and I mean not even the wildest circuit breaker, can act faster than a properly selected fast blow fuse - even the grid still uses them to avert catastrophic damage to the high tension lines.

Each output ideally would have its own protection that was tailored to the load characteristics for which it was being used. In any event, the input to the power supply should be fused, making your protection scheme downstream more flexible.

Thermal devices are based on current over time, and as such the delay should be predictable - should you be able to find a datasheet. But the delay, in most cases, will probably work out such that a 10 amp thermal element will blow soon enough that a 10 amp output channel wouldn't fail, provided the channel's absolute max ratings weren't exceeded. Personally, when I optimize things I like to oversize and derate when possible.

Now all you have to do is decide if the load you are powering will survive any delays in protective action. There can be a big difference between 20 amps for 1/1000th of a second and 20 amps for 1/16th of a second. If shorting is something you do frequently, maybe it's time for a current limiter.

Hmmm, I guess now I know why people often claim about getting something different as what they thought they get on ebay...

The offer already contains this table, which seems to be copied from a data sheet: 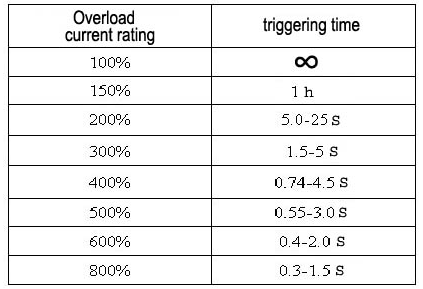 The triggering time is quite high, even for high overload currents, so this is not faster than polyfuses or even blow fuses. And it also shows that this device also is a thermal fuse since no mechanical fuse will trigger after one hour for a slight overcurrent.

The only benefit is that this device stays off after triggering and (probably) breaks the circuit physically. A polyfuse will reset itself if there isn't a small current flowing keeping it hot. And as it just adds a (variable) resistor to the circuit, it does not physically break the circuit.

By the way: Mains ircuit breakers usually are a combination of thermal and magnetic fuse. They also withstand slight overcurrents for some time (thermal), but will react very fast for high overcurrents (magnetic).

Not the answer you're looking for? Browse other questions tagged protection short-circuit fuses polyfuse or ask your own question.

26
Fuses: What are the practical differences between Ceramic and Glass cartridge fuses
0
Glass fuse identification - Siran No. F 13 4A
0
Going 20 Volts over what a Fuse Holder is rated for
1
An alternative to a regular glass fuse
6
Small step down transformer fuse, primary or secondary?
1
What *fuses* an electric fuse?
2
Jump starting a motorcycle behind a fuse? (slow blow atc fuse?)
1
Fuses & current ratings - are there fuses that blow "fast" close to their nominal rating?