Is it safe to implement a split power supply from two identical AC/DC adapters? [duplicate]

If I have two identical AC/DC adapters(Such as laptop adapters) can I achieve this as in the following illustration? Would it be safe?: 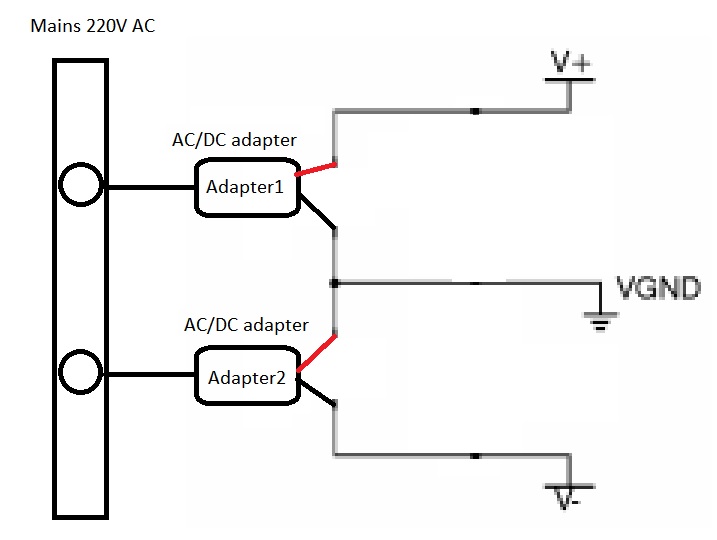 There is nothing fundamentally wrong with what you propose. Any purpose built dual output power supply is essentially the same thing. So using this approach can be a workable scheme to achieve a dual output + and - rail output.

One thing that must be considered here is that the two power supplies need to have fully floating outputs.

There are a number of serious disadvantages however. Here are some things to consider:

Edit/note: The safest is 2 terminals plus Earth connected to case, and Line-Neutral of primary isolated from secondary. This way even if there is a fault, the residual current devices of your house will trigger. 2 terminals which are isolated from the primary, Earth absent, is safe in the absence of fault but dangerous if there is one. 2 terminals which are not isolated from the primary, Earth absent, is generally very risky: consider a very simple voltage divider as an example, and imagine the bottom one breaks - the entire line voltage is present at the output...

Not the answer you're looking for? Browse other questions tagged power-supply power split or ask your own question.

8
Connecting two DC wallwarts in series - to produce dual DC supply
19
What are the highest DC and AC voltages or currents that can be considered as safe?
1
Is there an IC to make a split power supply from a single power supply?