Is there a simple circuit that outputs (min+max)/2 of a single-ended signal given as input?

My circuit needs to consume as little as possible, so I’d prefer it be implemented using only passive components ...

I don’t know whether this is possible. Do you have any ideas ?

As has been implied in comments, if there is a digital 1 or zero event for some lengthy period of time any peak measurement made will need to rely on analogue values being held on a capacitor and no, there is no way of passively achieving this.

I have previously done this by using "peaks detectors" (an opamp with diode and capacitor) for "storing" the most positive voltage and the most negative voltage - two peak detector circuits are needed. Also, some modest amount of low-pass filtering is needed to be done on the raw signal to prevent noise spikes causing too much of an accuracy limit. Here is the general idea for detecting the most positive peak of the signal: -

For my application the detector needed to be done at very high speeds because I was trying to implement a special circuit for detecting and resolving corrupted high speed data. I used a MAX999 comparator for each peak detection circuit.

If your data rate is modest, a better way would be to use a microprocessor and an ADC and actually measure the levels.

Producing a third voltage (or number) that is the mean of the two levels is of course trivial in comparison. 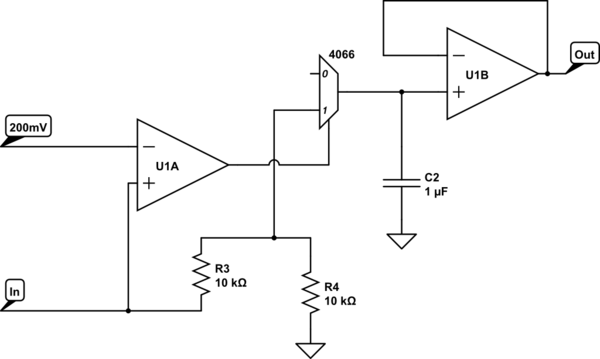 Whenever the input signal exceeds the reference (shown as 200mV) the input is assumed to be 'high' and the capacitor C2 charges or discharges towards 1/2 the input signal with a time constant of 5msec through the CMOS HC4066 switch. U1B acts as a buffer. If U1 is a CMOS op-amp the droop can be kept very low, even if there are a lot of 0's in a row. U1A as a comparator needs to switch much faster than the time constant of C2*(R3||R4) or the accuracy will suffer.

Not the answer you're looking for? Browse other questions tagged integrated-circuit circuit-analysis design or ask your own question.

1
Map n states to hardwired outputs
34
Is circuit design based on min/max values good practice?
1
Switching multiple outputs with a single input
3
What is a good way of estimating how long a battery will last for powering up a microcontroller
3
Random clock Generation with unequal 1s and 0s distribution?
0
Controlling the LM3914
1
I need to find Vin max(Common Mode) and min(common mode) for given circuit.
2
Differential to single ended audio signal
10
The Intuition for RLC circuits