What are some (bi-grid)tetrode tubes with negative resistance?

I asked earlier about Dynatron oscillator tubes but instead what I'm looking for is a bi-grid tetrode that has the "kink" in its plate-grid charactestic curve. I actually have a Sylvania 12K5 tetrode, but does that one have negative resistance? If not I'd like some suggestions for a better tetrode model I can find somewhere.

What you are looking for is this I believe: - 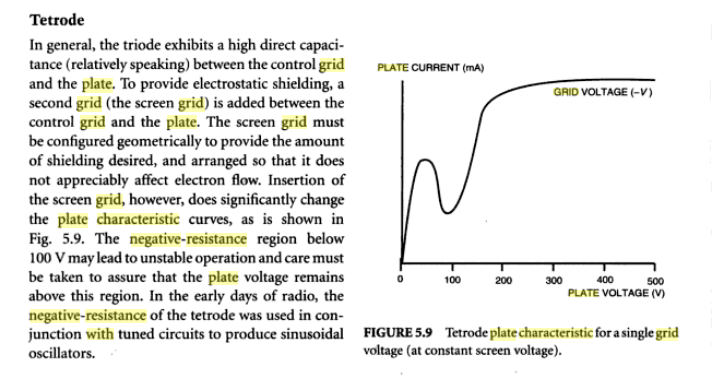 And as far as I can tell the 12k5 doesn't exhibit this characteristic but it may be documented somewhere else. However it is a low voltage tube/valve so I have my doubts. 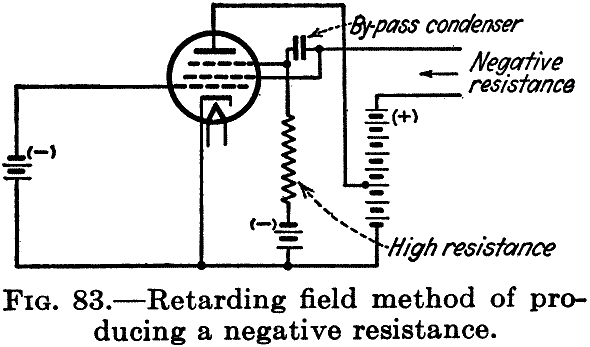 This kink (which will give name to Kinkless Tetrods aka KTxx series) is due to an anode emission phénomena. At a certain low voltage, the electrons hitting the anode create an electron stream (ejected electrons) that is attracted by the second grid. This is the reason of the existence of the penthode : a screen grid at cathode potential is introduced between the secondary grid and the anode to repel this stream to the anode.

So I did a little big more research on Google and wikipedia for kinky tetrodes(teehee :-p)and what I came up with(and just recently received from FedEx) is the Radiotron UY224 tetrode. Kinky tetrodes can be a problem for amplifiers because the negative resistance leads to parasitic oscillation that introduces excessive(or entirely unwanted)distortion but it can be useful for oscillator circuits like the Dynatron oscillator. This particular tetrode has quite a bit of negative resistance from looking at the graph in the article which plots the plate and screen grid current as a function of control grid voltage. Just what I was looking for!

An alternative is to use any old pentode, with g3 (the suppressor grid) connected to the anode. This effectively turns it into a tetrode. (Similarly, it's fairly common practice to connect both g2 and g3 to anode for triode operation).

You may need to browse some detailed data sheets or experiment with a curve tracer (or variable DC voltages and an ammeter) to determine the best bias conditions for the kink.

Normally the suppressor grid is connected to the cathode, or to 0V, to drain off secondary emission electrons from the anode before they interfere with electric fields around the screen grid (which is the mechanism behind the negative resistance region, or kink).

As I understand it, the Kinkless Tetrode (as in KT66) happens to have a suppressor grid, not brought out to a pin, but internally connected to cathode. The story (anecdotal by the time it got to me) was that it was a sneaky way to run around the patent on the power pentode (as in EL34).

Not the answer you're looking for? Browse other questions tagged vacuum-tube or ask your own question.