What's is the better? To interact with the DC side and low voltage or with the AC side?

We're going to make a DMX installation so there's a lot of work, and we would like to reuse it, so if it works with AC lights too it's better.

I've searched and would like to use this one: http://www.instructables.com/id/safe-and-simple-AC-PWM-Dimmer-for-arduino-Raspberr/step3/AC-PWM-dimmer-with-arduino/

Would it dimm the led? I understand that LED are not linearly related it terms of voltage/lumen relation, but would the driver change a lot? can i go from 0V to 3.5v in order to fade in/out it?

No, that method will not work. You would be chopping up the incoming AC waveform to a switch-mode power supply which, at best, would just get confused and not work.

You have to work on the DC side of things.

The lamps themselves contain a constant current sink (actually two of them in parallel) - the A375R. As a result, varying the voltage won't work - it'll just change the amount of heat dissipated and the brightness will stay roughly the same. 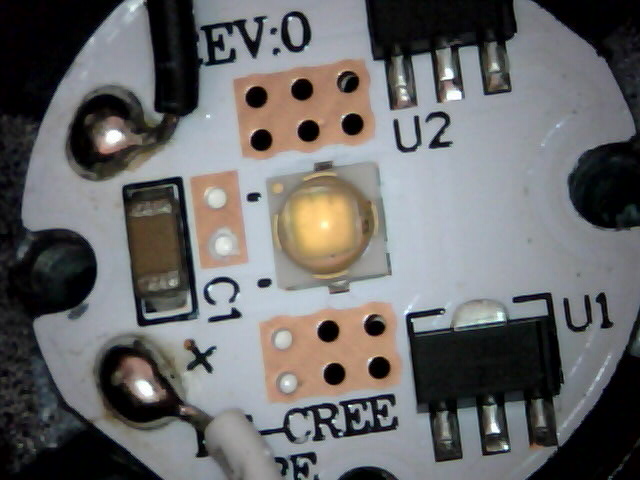 So you have to instead create a PWM waveform on the power or ground connection, which can actually be done quite easily by interrupting the ground connection with a powerful enough N-channel MOSFET. If you use a logic level MOSFET then it can be driven directly with an Arduino's PWM waveform. 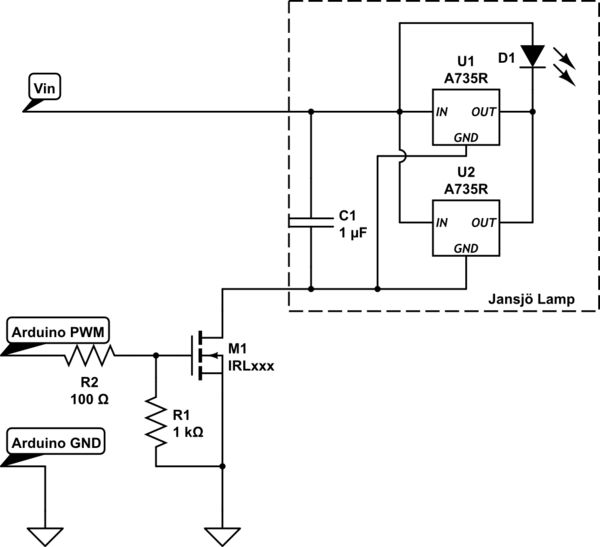 The presence of C1 in the circuit may cause some issues with the PWM signal, so it may be necessary to use quite a low frequency PWM signal to allow it to turn off properly in-between each cycle.

An even better solution would be to completely re-wire he interior of the lamp. Bypass the two regulators and the capacitor completely (remove them from the circuit board) and directly connect the power lines to the LED (move the GND connection from GND to one of the OUT pins where a regulator was). Then the whole lamp just becomes a plain LED for you to then control with a proper PWM LED power driver, such as the CAT4101, which will give you perfect control over the LED's brightness. Of course, the lamps can then never be used as normal stand-alone lamps again since they lack a driver of their own.

Not the answer you're looking for? Browse other questions tagged led adapter ac-dc dimmer or ask your own question.