I'm a first year engineering student who has a problem with harder nodal analysis problems. 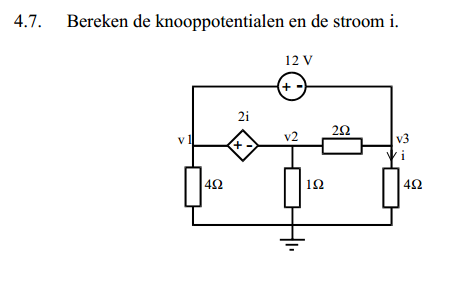 Consider the circuit in the attached image. The usual way to deal with the voltage sources in the upper left branch is to make a supernode. However, one of the nodes (node 1) is necessarily common to the supernodes. I need to know how to handle these situations with nodal analysis and without repositioning the sources. I'd be really glad if someone helped me.

Don't get thrown off by having multiple voltage sources attached to the same node: just follow the super-node procedure, and recognize that it's ok to combine a super-node with another node/super-node to make a "super-super-node" (or just a bigger super-node).

In your case, you will eventually have a super-node which contains nodes 1, 2, and 3, and 2 other equations which describe the relationship between (v1,v2) and (v1,v3).

This gives you 3 equations and 3 unknowns, which can be solved using some algebra.