AC Power loss of inductor in a buck converter

I have a custom piece of equipment that gives a value for AC power loss (Pac) for an inductor plugged into an internal buck converter circuit. The custom equipment has an oscilloscope which is monitoring the voltage across the inductor and the current through it. I am trying to figure out how this value is calculated using this data. Since the circuit is a buck converter, the voltage across the inductor is a PWM shape, with the voltage around Vin-Vout while the PMOS is on, and about -Vout when the PMOS is off. The current is a ramp wave with a DC bias since the buck converter is running in CCM. I am also making sure to run the circuit so that the inductor is far from saturating.

I have tried the following to no avail:

where D is the duty cycle between 0 and 1, T is the inverse of the switching frequency.

Just at first sight, your formula gives an energy (Joule), not power (Watt)...

If the "...custom equipment has an oscilloscope which is monitoring the voltage across the inductor and the current through it...", then the inductor losses can be calculated right out of the measured values (i.e. right from definition of average power) as:

where v(t) is the waveform of voltage across the inductor, i(t) is the waveform of current through it and T is period of these waveforms. Provided that the oscilloscope is a digitizing equipment, then, in principle, the corresponding voltage and current samples from within one period have to be multiplied, summed, multiplied by the sample interval and divided by the period (T) length.

For instance the trapezoidal integration method can be used:

As I already stated in the very beginning, your formula is not okay. At first, the T in it is superfluous (it is already incorporated in the duty cycle, D). Let's have a look at it a bit more closely. It can be rewritten (omitting the T, of course) as:

but is it already okay?

In principle, this idea is right in my opinion, but:

The resulting formula will be then:

It is questionable, however, whether the speculated presumptions (3) are "sufficiently" valid/met and how much they affect accuracy of the result.

This is an direct, experimental way of determining losses in any component, so you shouldn't doubt it. Now, if you could properly model the system, you should be able to obtain a formula for the losses. Your model, however, is inappropriate because you just can't say that the current when PMOS is Iripple. This only works for the perfect sawtooth wave case, and the losses will appear precisely by making the sawtooth wave seem more like this: 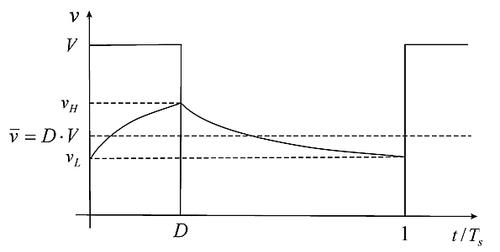 In this wave, the average values of the two parts of the cycle are different: one is higher, and the other is lower than the "middle value".

Not the answer you're looking for? Browse other questions tagged switch-mode-power-supply inductor electromagnetism buck power-electronics or ask your own question.