I'm using an AAT1217 for the boost converter in my circuit. The reference circuit I'm using is: 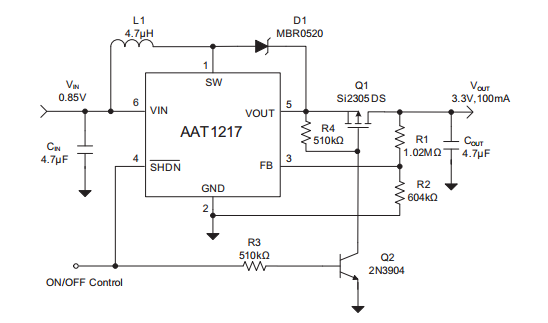 It suggests using these fairly large inductors, the ones that you can see the coils. My question is why aren't the normal 0402/0603/0805 SMD inductor packages being used instead? For example, the MLZ series from TDK has a similar DC resistance and a fairly large DC current rating of 500 mA. The fine print does mention that "Current assumed when inductance ratio has decreased by 50% max". When does the inductance ratio change?

Also, I've run some experiments with both the CR43 and the MLZ inductor and they are both able to drive the servo motor (MG90S) fine. Am I missing anything? Or is it perfectly fine to switch to a smaller, more compact inductor? (the other thing that I am wondering is if the AAT1217 datasheet was written a while back when small inductor packages did not exist).

If efficiency is not what you're after -- if you simply care for functionality and compactness -- then I don't see any problem using MLZ (or other "ferrite choke") inductors, as long as your circuit doesn't overheat. In practice, this means sticking to low power levels. Just ensure the current rating covers your needs (with healthy margin), and evaluate the power supply thoroughly.

Not the answer you're looking for? Browse other questions tagged inductor boost inductance or ask your own question.

2
Overheating Boost Converter
1
Find replacement for Tapped Inductor
1
LMR62421 Inductor selection for boost application
3
Extent of ground plane beneath filtered DC converter?
0
Inductor for Boost Converter
5
Measurement of an inductor not accurate at all
1
Can I use this inductor in my boost converter circuit?
10
Buck converter, squeaking/whining inductor
2
What could cause my boost converter to output below its nominal voltage?
0
DC/DC split rail converter with coupled inductor