edit -added pin 9 as output in setup and now HIGH/LOW code works. -When the pump is set to LOW it turns on, when it goes HIGH it is disabled. So when I plug the arduino in, by default the pump turns on before it reads any code. Is there anyway to set a pin to HIGH (by default) so that it doesn't pump when plugged in? ...I talked with the manufacture again, and it seems like they sell another model that doesn't pump when it's low... so for now, they suggested putting an on/off switch between the red wire and 5V pin.

I'm trying to control a 5V piezo pump (micro pump) with my Arduino uno, but I'm having some difficulty getting it to work properly. This is the pump I'm using.

I'm not sure if I should be using a separate power supply to run the pump, or if I can get away with using the 5V pin from the arduino. The pump uses 0.05-0.25W... so at 5 V, it should have a max current draw of 50mA. Would a resistor be enough to protect the arduino and run the pump (I'm using a 470 ohm resistor, not sure if it should be more of less)? The pump has a red wire(5V), black wire (grd), and a yellow wire (PWM control).

This is the code I'm using (trying to turn the pump on then off)... the code worked when I left the yellow wire unattached and sent the black wire through an N-Channel MOSFET... but it pumped very slowly. When I hook up the pump like the picture below, it runs loud for a second, then slightly less loud for a second and repeats... (it just pumps then sputters)

The manufacture told me I need to program PWM with certain duty ratio per 1 second period and that the pump is set to operate at a default frequency of 50Hz.

Any help in getting this to work would be greatly appreciated. Thanks! 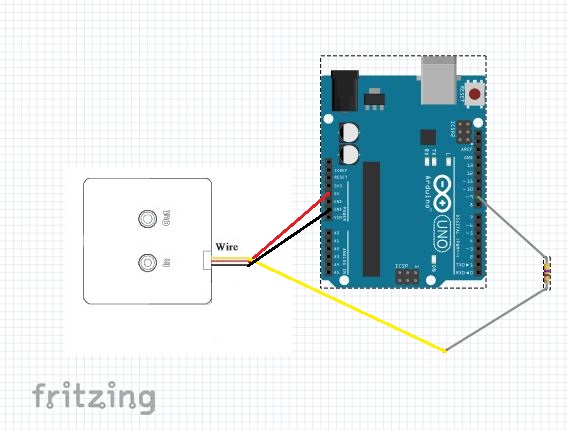 Default pin state on reset for the ATMega328P is input tri-state. Therefore, adding an external pull-up resistor to the signal line will keep it HIGH at startup. Connect a 10K - 100K resistor from the yellow wire pin to 5V.

pinMode(9,OUTPUT); enables the output, however startup config is LOW. Try:

N-Channel MOSFET between black wire and ground. Connect gate to digital IO pin on board. Pull down pin using 10K resistor to ground. Now setting pin HIGH will turn on MOSFET and allow current to flow through pump. Problem with this approach is there is another current path through the signal wire so even if the MOSFET is off it could still run.

The pump´s datasheet is not very clear, in some cases it refers to a 12 V input. I would try to get better information. With more precise wiring diagrams we can help you. Regarding the 470 ohms resistor, it doesn´t seem necessary, but won´t hurt if keeping it.

Not the answer you're looking for? Browse other questions tagged arduino pwm frequency piezo fluid-pump or ask your own question.