I've been hearing a lot in the media about how important rare earth metals are (from the economic standpoint of China limiting their export), but what do some of them actually do that makes them so essential that can't be done with more common elements like silicon, gold, copper, aluminum, germanium, etc? It seems all the building blocks of a digital computer such as transistors can be made without them, so why all the fuss?

I've dug around a little for articles, but all of those are written for the general public and only name what devices require rare earths rather than actual components.

Although tantalum is not one of the rare earths -- it is one of the "transition metals", like gold -- tantalum's scarcity (1 or 2 ppm of the earth's crust) and primary use in electronics (tantalum capacitors) fits in with the scope of this question.

Recent legislation in the US (July, 2010) requires companies to disclose if they are using products with tantalum obtained from the Democratic Republic of the Congo (DRC). As a result, prices have risen sharply as other producers come slowly back on-line. One mine in Australia represents 1/3 of the potential global world production. 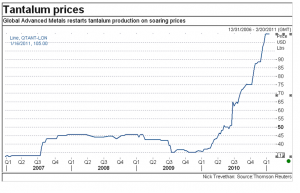 Because electrolytic tantalum capacitors can be much smaller than aluminum electrolytic capacitors of the same capacity, and have higher voltage ratings, they are used in almost all cell phones, and in other portable electronic equipment.

I designed in a couple of 1000 µF "tants" into a product a couple of years ago, and recently the contract manufacturer contacted us saying that the lead time on the parts had stretched out to 16 weeks and asked if I could find a substitute. As a result of this exercise, in my latest design I went back to surface-mount aluminum electrolytic capacitors, even though there was a significant space penalty.

Take a look at what's really in a integrated circuit, including its packaging. Silicon itself is abundant (expensive to refine to high purity and good crystal structure, but nonetheless abundant), but what about the doping elements used to make P and N semiconductor? What about LEDs? Those are usually not silicon and often contain gallium, for example. What about special ceramics used in semiconductors that need to have thermal properties closely matched to silicon? Take a look at what the varous ceramics of ceramic capacitors is made of.

There are a lot more material to electronics than copper and silicon.

It's not necessarily the silicon chips that they're talking about. Tantalum goes into capacitors, tin into solder, lithium into batteries. Neodymium goes into super-strong little magnets that hold the cover onto your iPad or the wall adapter onto your MacBook.

These various components were in many cases already made from more abundant elements in the past, but material science breakthroughs permitted great improvements that in some (relatively expensive) products were and are worth the extra material cost. Compare a Motorola "brick" cellphone from the 1980's to an iPhone and it's not just the chips that improved dramatically. Magnets can be made of iron, batteries can be made of lead, capacitors can be made of aluminum. It's just that those devices are dramatically larger, heavier or in some other way worse than their more modern counterparts.

Lately it's been getting questioned whether these are worth the human cost, the lives lost to war and slavery around the Congolese mines that source tantalum, tin, and tungsten. Another question is what will happen as China, which sources most of the world supply of rare earth elements such as neodymium, cuts back on exports to fuel its own manufacturing capacity. (Answer: Molycorp is reopening an old mine in California.)

It's a comparable argument to whether driving a car powered by oil is immoral when people are fighting wars for oil. The problem isn't so much that oil is rare today as that its clustered distribution over the planet makes concentrating wealth by monopolizing production easier than if it were distributed more evenly. Of course we can imagine supplies drying up within a few decades, but that's quite a bit further out than the 5-15 years most people will keep their next car. You can power a car with a coal-fired steam engine, or a coal-fired electric plant that charges batteries, or solar panels charging batteries, but gasoline has the best mix of features and price at the moment as far as most paying customers are concerned. It remains to be seen if the bulk of humanity will forego gasoline for electric cars before they cost less. Not many people are ditching their cellphone to go back to a rotary dial landline phone, full of copper and iron, even though it's cheaper.

It's not necessarily the case that things will inexorably get better. Batteries can be made from other elements that are orders of magnitude more plentiful, such as iron and sodium, but those batteries may not ever have the energy per weight of a lithium battery. It's possible that in a few centuries, after oil, coal, lithium, etc. are mined out, people will drive cars that have much less range than they do today, but that recharge quickly enough that it doesn't matter too much. On the other hand something much better may come along, or who knows, maybe we'll all be videoconferencing by then.

There are scientists working on these problems, but material science is a slow field. It's very difficult if not impossible to model the macroscopic properties of a new material in a computer. Progress essentially comes through educated trial and error. Even once a new material is fairly well understood, the theoretical model and experimental testing may not line up perfectly. Trying to concoct new materials from a wishlist of desired properties can take decades.

Well, there is alot of trading fuss around all this. In fact, you need very very little rare earth materials in modern consumer (micro)electronics. Some electronics indeed heavily depend on them (like some times of lasers and LEDs), but they hardly consume significant amount of world production. Also, notable use is for permanent magnets.

Major users of rare earths are special types of steel and other materials used in space/military/nuclear areas (and obviously nobody would reveal how much is used there per country).

Because same property named "ionic size" makes this metals both:

Some special value of ratio of ionic size with atomic mass for each of this elements will make them difficult to concentrate in nature and separate chemically. Same ratio causes properties like ferroelectricity, ferromagnetism, high dielectric constant of oxides etc. to be superior to other less rare elements with different ionic size.

The high cost of rare elements has a natural cause. Side note: The rarest and most expensive elements in electronics are "unobtanium" and "unaffordium".

16
Why are we still using resistors with %5 tolerance while they can even manufacture a 14.318182MHz crystal?
18
Why are MAX-, AD-, LT- parts (among others) so expensive?
4
Why are reversed geometry (0306, 0204) capacitors not used more often?
3
What are the manufacturing difficulties for a large Li-Ion battery pack?
9
Why are accelerometers (and other MEMS devices) so rarely integrated into components?
10
Why are the heatproof composites used for semiconductor packages never used for coil formers, connectors and switches?
10
What are some reasons for hand painted dots on chips?
31
Why are most COB LEDs physically yellow?