Is sequential logic really required to solve some types of problems? [closed]

Can all digital design problems theoretically be solved using only combinational logic, or are there specific examples that have to be solved sequentially? I read that sequential logic is only required due to hardware limitations.

EDIT: Maybe a better phrasing of the question would be: Can any algorithm or circuit be theoretically solved using only combinational logic, even though practically you would want registers or events happening each clock cycle? If not, what would a specific example be?

EDIT2: Another way to phrase the question would be to say: Is there any circuit that can't theoretically be solved using only combinational components like AND/OR gates and MUX's?

EDIT3: I'm thinking the only real problem requiring sequential logic is the problem of combinational loops. That can only be solved with a FF as far as I know.

The size of a combinatorial circuit is a function of its input. The more input a circuit can use in figuring its output, the larger the circuit must be. Suppose, for example, one needed to design a circuit that would determine whether an input had an even or odd number of rising edges within the last second, if every high and low time was guaranteed to be at least 100ms. One could use a chain of purely-combinatorial buffers with a 91ms propagation time to generate twelve inputs to a circuit that could then count the number of "01" sequences within the bit stream. Such a circuit would be rather large, but not impossible.

If one wanted to make a circuit which could say whether the input had pulsed high an even or odd number of times in the last minute, one could use the same principle, but the result would be rather unwieldy. If one has some clock signal available that may help stabilize timings and prevent the circuit from becoming quite so totally impractical(*), even without feedback (note that combinatorial circuits can use clock signals, but can't generate them). Clock-facilitated optimizations may help prevent a circuit from becoming totally unworkable, but it would still be large. Increasing the time in question to a day, year, decade, or century would likewise grow the machine. If one didn't need the machine to last more than 100 years, one could in theory build a purely-combinatorial machine to report whether the number of pulses in the last 100 years was even or odd, and then use that for up to 100 years, but doing so would be monstrously impractical.

By contrast, using sequential logic, the task could be accomplished using a single D flip flop with an inverted output. Even though in the course of a year the device would be accepting millions of seconds' worth of "input", that would be no problem since a single flip flop will suffice to hold state derived from an unlimited quantity of input.

(*) It's possible to build a D flop without using feedback if one can guarantee that the time between clock pulses will not exceed some limit, though unfortunately this simulator can't handle monolithic MOSFETs. 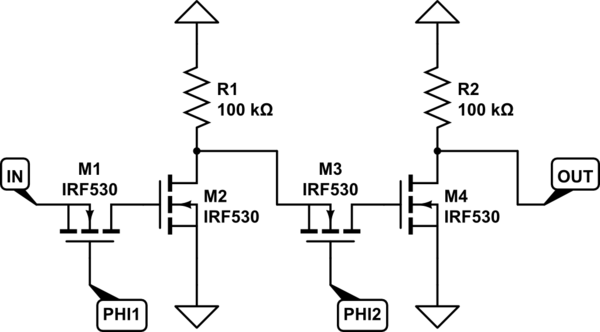 Further, even if one views this style of circuit as "cheating", it's possible to use clocking to stabilize propagation delays of purely sequential logic by having a clock select between logic paths with shorter or longer propagation times.

simulate this circuit Unlike the MOSFET circuit, the one above will simulate. Each buffer has a 700ns propagation time, and each mux outputs will change on the rising edge of the clock and no other time provided that rising edges of the clock occur between 700ns and 1400ns after an input change, and the falling edges do not occur until at least 1400ns after an input change. The above circuit initially meets the timing constraints, but because the clock and data are not exact multiples drifts to violate it, showing the consequent behavior.

If you have some set of boolean inputs S, and some function f that maps S to a set of boolean outputs R, then yes: any f can be represented with pure combinational logic, and you can derive which logic you need from the Karnaugh map etc. The process of filling in the Karnaugh map may be difficult: you're manually pre-computing all the answers.

This has two big limitations:

You can't use pure combinational logic for e.g. the classic lift controller state machine, because you can't record whether a button has been pressed or not. You can't use it for signal processing because you need to record previous values of the signal. It also makes for awkward and expensive implementation: if you want to find which of a billion records matches a particular input, you have to have a billion comparators.

I think this strays into Turing-completeness territory as well. The function that outputs 1 if a Turing tape halts and 0 if it doesn't isn't theoretically computable by either kind of logic.

Sequential logic was developed out of a necessity to be able to accurately predict when a certain value or set of values was in a certain place, so that other logic could decide to then do something with that information. Many logical problems can be resolved using only combinational logic, but a problem arises when you need to use the output of one function as an input to another function. In order to create general purpose hardware, it is necessary to be able to copy and reroute binary values at will throughout the system so that different functions can be performed in an arbitrary order. Without this ability, we have to add logic for every possible order of operations that could ever happen anywhere, which is not possible.

Also, if you can build a working multiplexer without a single flip-flop, you really need to go file a patent, like, right now.

All digital problems that are inherently combinatorial can be solved using combinatorial logic. For example AES-encryption would normally be done using sequential logic, but it could theoretically be done combinatorially provided you had all the available inputs ready simultaneously, and unrolled all the loops by duplicating logic. Of course, it'd be hideously inefficient with all those duplicated logic blocks, but still possible.

However, some problems are inherently time-based. If your problem description contains any kind of "do this, then afterwards do that", you will need to use sequential logic.

Any realtime system using digital filters or controllers will necessarily require memory elements fulfilling the delay requirements of discrete-time difference equations. Batch data that could theoretically provide all relevant input data, is not available in realtime systems. In a control system you usually at least require an Integrator which requires a memory in a digital implementation.

Not the answer you're looking for? Browse other questions tagged digital-logic design or ask your own question.

3
Sequential Logic - Primarily For Signal Storage?
0
Sequential logic counters
11
How do I debug red signals in ModelSIM?
2
Link between Combinational Logic and Sequential Logic
2
USB to TTL (CH340G) and maybe Logic level converter to program chips
0
How to conclude if logic circuit with feedback is combinational or sequential?
0
Would like some help with Logic Gates, Trying to use two inputs to create three outputs
0
Replacing a diode-OR gate by a circuit that behaves the same way (also in the presence of feedback loops) without accumulating voltage loss
1
Sequential logic in VHDL
0
Problems triggering opto-isolator with logic gate