For your answer, you have to go back to basic op-amp theory.

When you provide negative feedback to an op-amp, you make the negative input track the positive input as closely as possible.

Now tie the positive input to ground. The op-amp feedback is going to try to keep the negative input at that same potential: ground. Thus the name: Virtual Ground.

Note that when you inject current into that (-) node, the op-amp's output drives the feedback resistor to keep the (-) input at ground. This property is used to create a summing amplifier, where multiple currents can be summed into that node to create a voltage output that represents the sum of those currents. This configuration is called a "Virtual Earth Summing Amplifier".

Most analog audio mixing consoles use virtual-earth summing amplifiers for their mix busses.

Finally, note that it DOESN'T have to be the the (+) input grounded and (-) input as the virtual ground. If your op-amp has an inverting stage after its output, you could quite easily take your feedback from the output of that inverting stage rather than from the output of the op-amp. In this case, the (+) & (-) inputs swap: the (-) input is grounded and the (+) input is the virtual ground.

Do note that you have to take into account the phase margins of both stages when you cascade stages in that manner.

You can add an inverting amplifier after a differential amplifier and this, in effect, swaps the pin which will become a virtual ground when negative feedback is applied.

Your premise is wrong. You can have an op-amp with negative input grounded and positive input at virtual ground. There has to be an inversion of the output before the feedback gets to the positive input.

This is a common situation in loop-powered instrumentation. Below is one example (U2), but there are many others, including many of my designs. 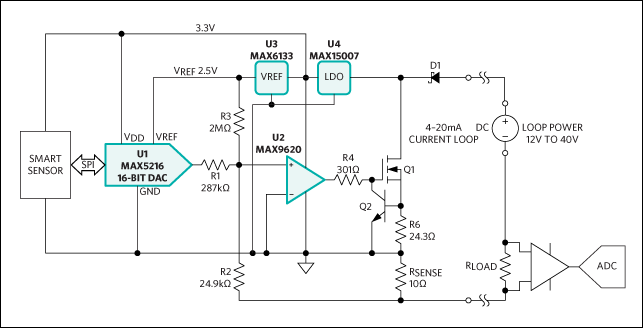 If the output of the op-amp goes higher, the MOSFET Q1 turns on more, which draws more current from the "loop power supply". The voltage across the 10\$\Omega\$ sense resistor becomes more negative, which results in negative feedback through the non-inverting input of U2 (via R2).

(R6/Q2 prevent U2 from driving the loop current beyond about 26mA- which is when the voltage across R6 gets to about 0.6-0.7V (enough to turn Q2 on). This is kind of a pathological condition that is being protected against- not part of normal operation- if Q1 turns on too much the supply voltage can be compromised.)

Not the answer you're looking for? Browse other questions tagged operational-amplifier amplifier ground or ask your own question.