I need to take the ratio of two filter outputs as part of a project. I converted them to DC voltage values using a rectifier and a smoothing capacitor thinking that this would make division easier. But I'm stuck for what to do now.

A guitar signal will eventually be used as the input of the system as this is intended to be a guitar tuning tool. So the frequencies used will be in the range of 30-600Hz. The input signal is fed into two filters, one high pass filter and one low pass filter. These both encompass the 30-600Hz frequency range. I want to perform division of VoutHPF/VoutLPF and feed the resultant voltage into a flash ADC and drive a strip of LEDs, ie. higher frequency means higher voltage.

Also, both voltages (VoutHPF and VoutLPF) should never equal 0. They will lie within the range of (0.5-2.5V). Any help would be greatly appreciated.

I'm going to copy my answer to an old question here, because the title of this question makes it much more likely to be found in the future. This answer was originally meant to answer part of this question.

If you have an analog multiplier, an analog divider is "easy" to make: 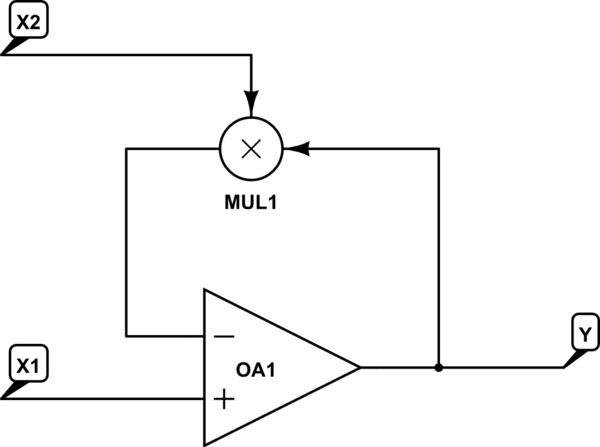 Another approach would be to first use log amplifiers to get the logarithm of X1 and X2, subtract, and then exponentiate.

Would it be theoretically possible to speed up modern processors if one would use analog signal arithmetic (at the cost of precision) instead of digital FPUs (CPU -> ADC -> analog FPU -> DAC -> CPU)?

At heart it's a question of technology---so much has been invested in R&D to make digital operations faster, that analog technology would have a long way to go to catch up at this point. But there's no way to say it's absolutely impossible.

On the other hand, I wouldn't expect my crude divider circuit above to work above maybe 10 MHz without having to do some very careful work and maybe deep dive research to get it to go faster.

Also, you say we should neglect precision, but a circuit like I drew is probably only accurate to 1% or so without tuning and probably only to 0.1% without inventing new technology. And the dynamic range of the inputs that can be usefully calculated on is similarly limited. So not only is it probably 100 to 1000 times slower than available digital circuits, its dynamic range is probably about 10300 times worse as well (comparing to IEEE 64-bit floating point).

Not the answer you're looking for? Browse other questions tagged voltage dc analog-computer or ask your own question.

38
Is analog signal arithmetic faster than digital one?

3
Is it possible to power an AC-to-DC switching adapter with a DC input?
1
How can I convert very high, fluctuating, AC voltage to 240VAC at 50Hz?
0
Reading battery voltage via frequency
0
5v DC +ve connected to 24v negative is this safe?
1
Understanding this AC coupled circuit
2
Connecting bandpass filter to comparator generating excess noise
0
Why is this voltage follower not working in Proteus?
0
Converting PWM to DC voltage