I have a maxwell 1200F 2.7V ultracapacitor which I charge using a 16V supply and a voltage divider in parallel with the capacitor. It's a really slow charge.
I also have a 4V supply which has higher current ability. I want to charge the cap directly from it. I was wondering if it is safe to charge it up directly with that supply. It will be under constant supervision and I will disconnect it as soon as it hits 2.5V. Is this safe?
If you think it can be done, can you post some references and sources for further reading? I don't want a supercap blowing up in my face...

That should work as far as the capacitor is concerned, but the PSU might not like it. It all depends on that; it might draw too much current from it. But what you could do is buy a resistor to put in series. You can use the following two formulas to work out the resistance and power rating they'd need to be:

So if you want to use the 4v PSU and it has a 2A rating, the resistor you should use is:

The 4v PSU sounds like the best choice, because less power would be wasted in the resistor while charging the capacitor. Also, since it has a high current rating, it should be faster than the other PSUs. [However, as the capacitor charges more fully, it will slow down charge rate to about a third. (4-2.5)/4 = 37% speed.]

To help you decide on a PSU: for the fastest charging speed, you want a PSU with the highest current rating. (So a 24v, 2A PSU would charge at the same speed as a 4v, 2A PSU). But the closer the PSU's voltage is to 2.7v, the less power you will waste on the resistor. So if you used a 24v, 2A PSU and a 4v, 2A PSU with resistors as calculated above, they would charge it at the same rate. But the 24v PSU would consume a lot more power doing so, wasting it through the resistor.

You could use the following circuit to stop at a given voltage: 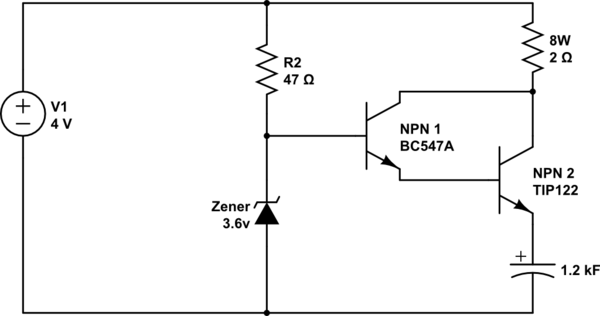 That should charge the capacitor up to about 2.3v. (A bit of safety margin is a good thing)

Not the answer you're looking for? Browse other questions tagged power-supply capacitor charging or ask your own question.