In my textbook these are the definition of gain and phase margin:

The gain margin is defined as the change in open-loop gain required to make the system unstable.

The phase margin is defined as the change in open-loop phase shift required to make a closed-loop system unstable.

Sure, some quick plug and chug into MATLAB allow me to acquire these two values, the more gain margin and phase margin the merrier. But what does this all mean?

For example given the following plot 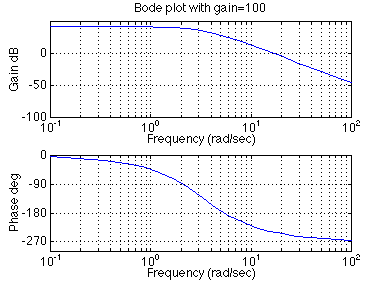 If I were to increase the open loop gain K, then the observed effect on the Bode plot would be a vertical translation upward. I can't see exactly a simple shift upward in the Bode plot implies instability of the system.

Further more, how can I understand these two parameters physically? Here is my simplistic understanding (if I were to pretend to be doing some analog design). The open loop gain K is induced by the amplifier which can exceed the maximum power handling capability of the amplifier hence causing the system to blow up. On phase margin, since the phase implies a delay in the system, then this could potentially cause some scheduling issue in a real time controller.

But none of the above interpretation is satisfactory for me and I can't find any satisfactory explanation why changing the gain and the phase of the system will induce instability. Say I had some circuit, then I plug in a device that induces a phase delay (an inductor for example)...I can't see the cause and effect that would imply the system could go unstable. Can someone quickly comment on the physical interpretation of these two parameters.

If, at the "phase inversion" frequency where the phase shift is 180 degrees, there's more than 0dB gain; then it's as though an op amp's inverting and non-inverting inputs were effectively swapped. Negative feedback at this frequency behaves like positive feedback, causing divergence instead of convergence. This makes just about any closed-loop system become unstable, regardless of whether it uses an op-amp or any other similar way of closing the loop.

In your example bode plots, the -180 degree phase shift occurs at about 5 rad/sec. And since there is more than 0dB of gain at that frequency, the system will tend to oscillate. And, the frequency where the gain drops to 0dB is just under 20 rad/sec, where the phase shift is about -245 (?) degrees. So both the gain margin and the phase margin are negative, and stability is not assured.

If the closed-loop gain was adjusted (without affecting phase response) such that the unity-gain frequency was 3 rad/sec, where the phase shift is -120 degrees, then such a system would have a comfortable 60 degrees of phase margin. This is a generally accepted design rule for most op-amp circuits.

So in terms of the Bode plot, phase margin is determined at the frequency where the gain is 0dB (unity gain): subtract the corresponding phase shift from 180 degrees.

Similarly, gain margin is determined at the frequency where the phase shift is 180 degrees (phase inversion): subtract the corresponding gain from 0dB.

The general condition for stability is a bit more complicated, it involves tracing a contour on the complex frequency plane and comparing with poles and zeroes (Wikipedia Nyquist stability criterion http://en.wikipedia.org/wiki/Nyquist_stability_criterion ); I briefly learned it in school and never used it in 20+ years at my job. For engineering purposes we're interested in keeping the system stable, with some margin to guard against variations (like from one device to another device, or variation over temperature, or over time.) There's often enough uncertainty that a simplified heuristic like gain margin or phase margin is preferable to an exact, analytic mathematical proof like the Nyquist stability criterion. So the simplified heuristic is that as long as the 180 degree phase shift point is attenuated below unity gain, that is just barely sufficient to avoid an amplifier behaving as an oscillator.

Not the answer you're looking for? Browse other questions tagged bode-plot phase-margin or ask your own question.