I am trying to put together a model rocket launcher for my son and am having issues with wiring. He wanted it to look "cool" so I have two SPST switches that light when powered, and a single SPST push switch. All are in series, and powered by two 9v batteries in series. One switch powers, then the next arms, and finally the push button is supposed to fire. What happens in reality is when the circuit is closed by the push button the lighted switches turn off and power is lost. I've included a diagram. Do I need resistors after grounds on the switches to limit power flow? I've looked at several designs online and mine seems to be the same. 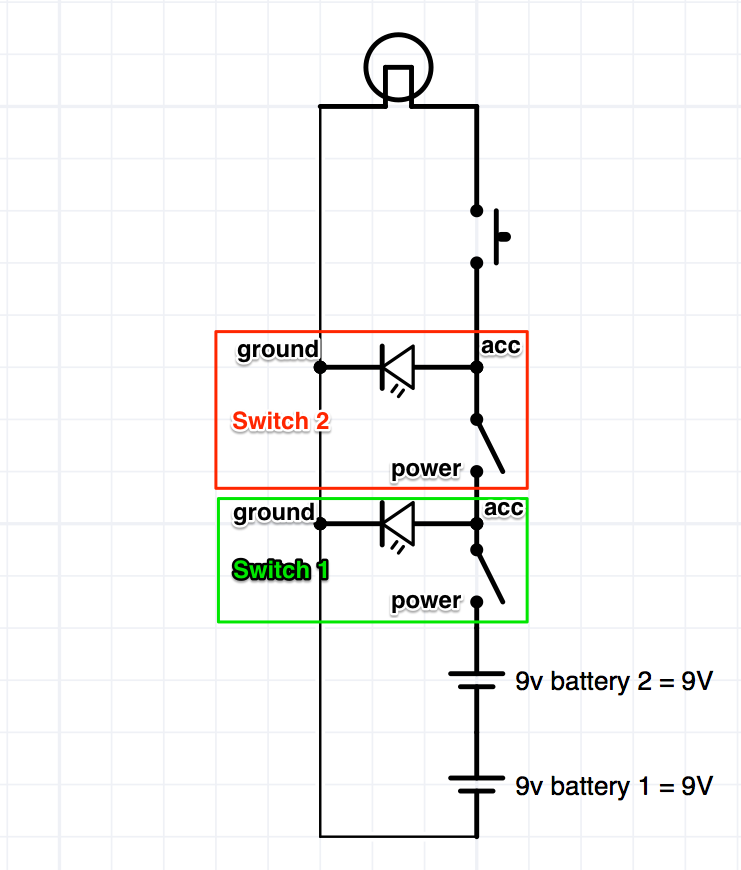 two possibilities . your circuit looks fine . have you connected to the correct terminals on the switches ? Or it could be that your battery is too small . In that case the igniter would draw so much current that the battery voltage falls too low to ignite or light the LEDs. I would monitor the battery voltage with a multimeter whilst operating the switches. I assume that the LEDs have an internal resistor . If they do not you will need to add series resistors of around 1K.

Like Andy said the day you asked, you need a resistor in series with each LED. Just the LED, not the switch because then you'd be running the igniter through them also and it may not get enough juice to light the candle.

Without the resistors, the LED('s) will drag the battery down to the lowest forward voltage that is currently powered (read the datasheet(s) to see what that is). This is potentially hazardous depending on how much juice the battery can supply and how spectacularly the LED explodes. Judging by your failure report, you're probably not using a car battery. :-) Did you notice that they were particularly bright? As in visible in direct sunlight?

OR, if you still measure the full battery voltage with both LED's on, and you're using a small enough battery that can tolerate a short-circuit without blowing up itself or the wiring, then I'd say that you have a simple short somewhere downstream of the firing button.