Thyristor not switching on when 'cold'

I have breadboarded a simple circuit using a 2N6395 thyristor to drive a resistive load. In simulation all works well, and even the physical implementation works sometimes. 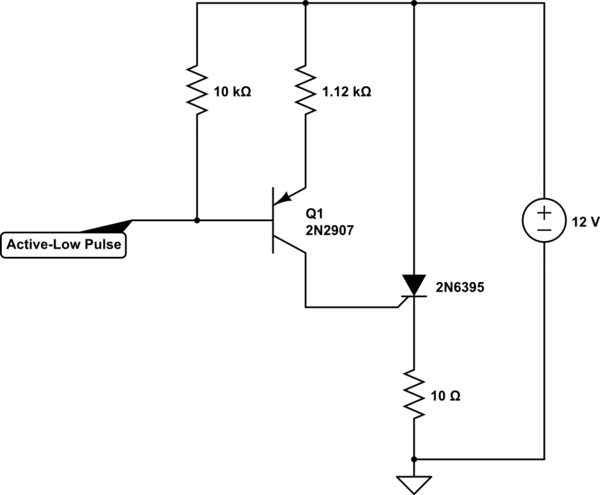 After physically building this circuit I found that nothing happened when triggered despite the expected voltages/currents being present with a nominal 10mA current draw. After tinkering with the circuit a bit I found that if I applied a larger pulse voltage to the gate of the SCR it would trigger and latch.

So, what I found seemed to require a component redesign, right? Actually, after the circuit initially conducts in the manner described above it will trigger thereafter by the transistor when an appropriate pulse is applied to the base. In summary:

Trigger and resetting the circuit will continue to work as expected from this point forth until I allow the circuitry to cool down before trying again.

I thought it may have something to do with the given gate current not allowing sufficient charge to be stored quickly enough at the thyristor gate, so I tried leaving the circuit on for a sufficient amount of time for the charge to build; this had no effect.

Looking at the gate current/pulse duration curve given in the datasheet, 10mA should be sufficient. This is especially true considering the pulse is done physically and not controlled by logic. 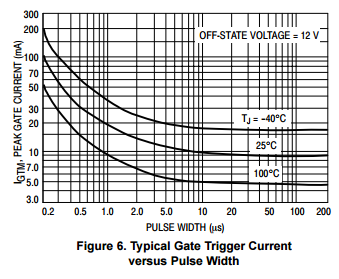 The gate trigger pulse needs to be referred to ground (i.e. the cathode potential), not to the supply rail. You will need to redesign the gate driver accordingly.

Not the answer you're looking for? Browse other questions tagged trigger thyristor or ask your own question.