Using a block diagram for the RS flipflop, add appropriate gates for a D-flipflop

I have been given the problem

"Using a block diagram for the RS flipflop, add appropriate gates for a D-flipflop".

Now, I can create the gate diagram for both RS flipflop and D flipflop (below), but I have never been tasked with creating a block diagram. I am a computer science student in a computer architecture class, so you can understand my confusion. I know SE likes questions that can have direct answers, so I'll stray away from asking "Where can I learn to create block diagrams". Instead I'll ask this:

How do I turn these gate diagrams into block diagrams?

Perhaps this might help. I don't answer 'homework /classwork' questions but I'm happy to give you a nudge in the right direction. 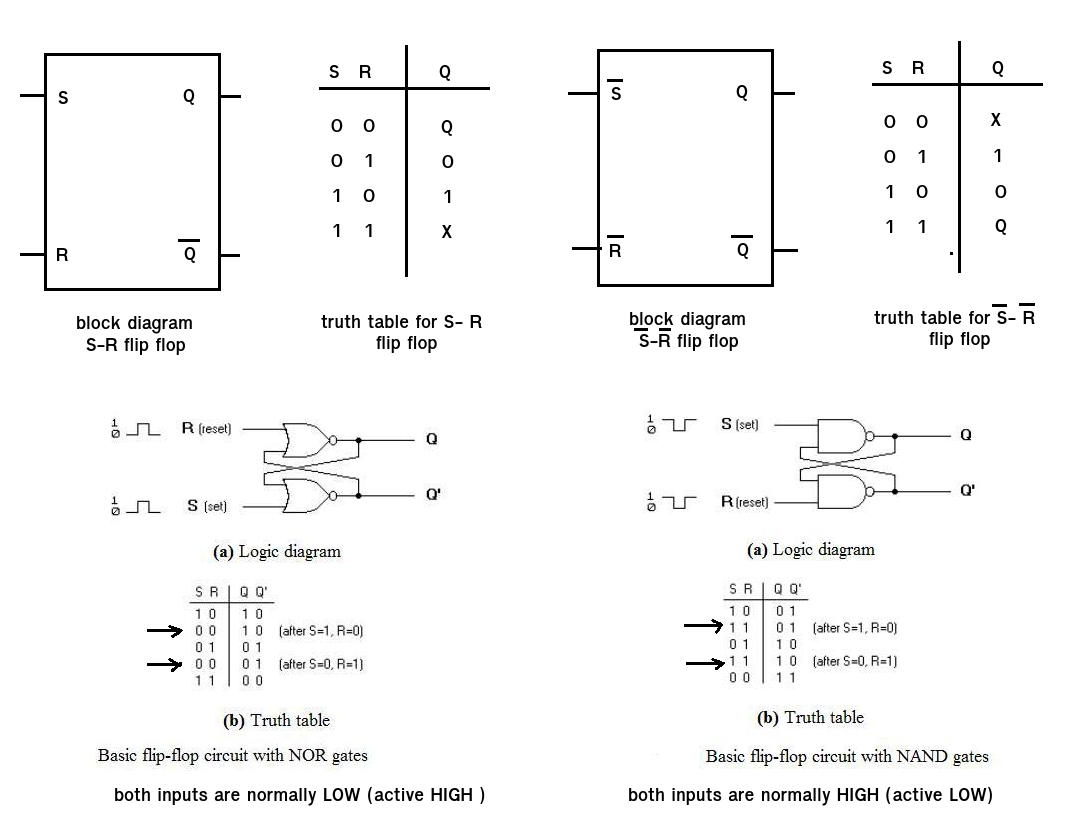 I've show the block diagrams for an S-R and a NOT S - R flip flop. All you really need to know about them is their truth table.(i.e. the logical relationship between inputs and outputs)

You can create S-R flip flops that change using either an active HIGH pulse or an active LOW. It depends upon which gates you have used to create them.

Its a good idea to show the difference between them (hence the bars above the S and R to show its active LOW).

The problem with a simple S-R type flip flop is that there is a logic race condition. The outputs don't behave when the inputs change and you get both outputs either high or low (0 - 0 or 1 - 1) instead of one being the complement of the other (0 - 1 or 1 - 0).

Imagine what would happen if the Q output operated an accelerator and NOT Q operated a brake in a machine. You could end up with the brake AND the accelerator operated together - not good.

To avoid this race condition extra logic gates can be connected around a basic flip flop to form a D-type, J-K or T (toggle) flip flop.

I think the question being asked is starting with a block diagram of an S-R flip flop add some gates to convert it to a D-type flip flop. You need to decide what constitutes the S-R flip flop (built around NOR gates or built around NAND gates)

I would suggest that you give TWO answers to cover all eventualities.

Not the answer you're looking for? Browse other questions tagged flipflop logic-gates diagram or ask your own question.