I'm designing a typical Class AB amplifier using diode-connected BJTs to achieve the biasing. I have a requirement to keep the total quiescent current at room temperature to less than 8mA (from a single rail). Additionally the amplifier has to reliably source 100 mA \$AC_{pk}\$ to a \$100 \Omega\$ load over the industrial temperature range of \$-40^\circ C\$ to \$+85^\circ C \$. Here is the current rendition of my schematic: 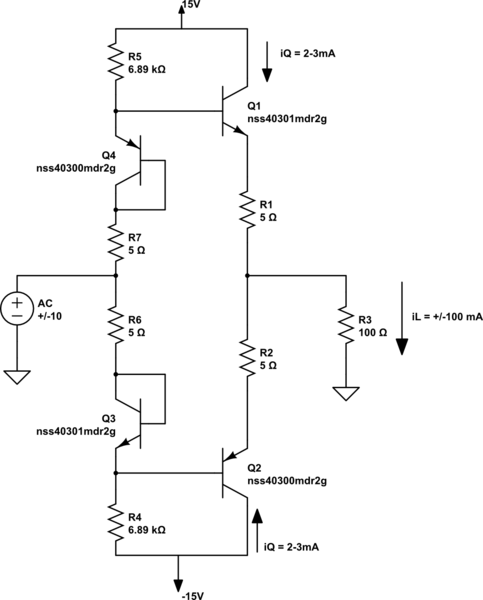 The resistors R4 and R5 have to be sized such that they can supply the maximum base current required by Q1 and Q2. However, I cannot have R4 and R5 too low due to my low quiescent current requirement.

I don't know how much the base current on the BJTs can vary. Before you step in and give the usual answer--"a lot" (which may very well be the case), let's look at what I have so far. I'm using the On Semi NSS40302PDR2G complementary NPN/PNP. Let's just consider the NPN case for now:

Based on the temperature-dependence formula SPICE uses:

Setting tolerance to zero and plugging in the 100 mA for \$i_C\$ and the remaining parameters pulled from the SPICE model gives a \$v_{be(on)} = 0.655\$ (close enough to the datasheet that I believe it).

Now how much TOL do we need to reach the 0.75V stated as the MAXIMUM in the dataseet? Solving with mathematica gives:

That is, both Is and NF can vary by 15% according to the datasheet. Now we get the the Monte Carlo analysis. In order to show that my circuit above works over device variation and temperature, I am performing Monte Carlo analysis in LTSPICE by varying all the BJT device parameters by 15% and Beta by 75%. This gives me huge base currents for some cases (much more than anticipated by the \$\beta = 179\$ calculation).

Am I being too hard on myself? By varying the device parameters by 15% over temperature, some cases give me a Beta <20. Which for most BJTs would be expected, but I specifically chose the On Semi NSS40302PDR2G for the seemingly excellent Beta.

I don't now if your simulation is correct, but you could make it less beta-dependant by increasing negative local feedback, by for example emitter degradation, such as increasing R1 and R2.

By using a Darlington or Sziklai pair, R4 and R5 can be increased while still maintaining output current. Discussion of thermal properties: https://sound-au.com/articles/cmpd-vs-darl.htm#s4

If some crossover distortion is acceptable, the biasing voltage could be lowered so that the quiescent current through Q1, Q2 is 0.

Not the answer you're looking for? Browse other questions tagged amplifier bjt monte-carlo or ask your own question.

5
Designing yet another BJT amplifier given some constraints
4
Required Emitter Resistance \$R_E\$ for the Maximum Emitter Current for a BJT
0
Can you find an analytic expression for the (beta)hfe of a BJT?
2
Monte carlo analysis cadence
3
Relationship between base-emitter voltage, base current and collector current
5
BJT Voltage Divider Bias Circuit problem
0
LTspice Monte Carlo with different model libraries
1
Why does a rise in ambient temperature cause a base-voltage-biased grounded emitter stage to saturate?
1
How to use Ebers-Moll equation to calculate collector current?
1
Capacitor that connects the base and the collector of BJT makes it hard to study multistage amplifier