What is the effect of pulsed discharge on watt hour (Wh) efficiency of lead-acid batteries?

When discharging a (lead-acid) battery you see a voltage increase (volts rise) as soon as the discharge is paused. 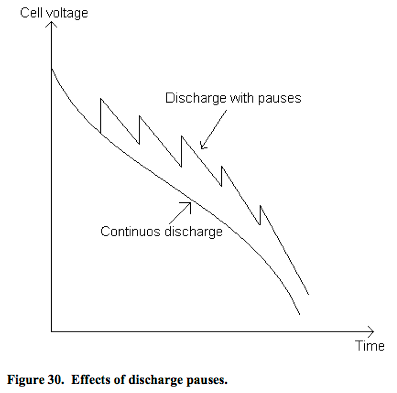 In the quest for optimizing watt hour [Wh] lead-acid battery charge/discharge cycle efficiency, an idea is to do pulsed/paused/interrupted discharging (at a slightly higher discharge rate then with a constant current discharge regime) and give the batteries some time to recover (voltage) in the pauses.

Is there any study or measurement report that has investigated the effects of pulsed discharge on the Wh-efficiency of (flooded) lead-acid batteries?

The voltage of a battery droops during discharge because of its internal resistance, which is primarily a function of the ion concentrations in the electrolyte. Because ions must physically move through the electrolyte during discharge, a gradient in the ion concentrations is created, with them being most depleted in the vicinity of the plates. Pausing the discharge allows those gradients to smooth themselves out, reducing the overall resistance. This means that for a constant-current discharge, you can recover a little more of the energy stored in the battery to do useful work, because you are wasting less of it as self-heating in the battery.

However, if you have a constant-power load, as you note, you need to raise the discharge current between the pauses in order to maintain the same average power output to the load, which means that the power lost during the discharge periods could be higher than it would be with continuous discharge, even after accounting for the reduced average resistance.

Furthermore, you also need to consider the overall efficiency of the circuitry that allows you to pause the discharge. I don't know what you have in mind, but transistors have voltage drops, relays have coils that need to be driven, and the control circuitry consumes power as well. The extra complexity also has an adverse effect on the overall system reliability. My guess is that the losses will far exceed any potential gain from doing the paused discharge. You'd be better off just using extra batteries to reduce the continuous discharge current in each one.

Not the answer you're looking for? Browse other questions tagged batteries discharge efficiency lead-acid or ask your own question.

0
What voltage of Li-ion battery to run 24 volt motor (6 cell or 7 cell)
2
What is the charge-discharge watt hour (Wh) efficiency for lead acid batteries at different SoC and charge current 10-35A/100Ah C10?
1
Li-Ion pulse discharge to improve output characteristics
2
Replacing four 6V flooded lead acid (FLA) batteries with two 12V AGM in a floor scrubber. Will this work?
4
Is this fast charging method acceptable to charge FLA (flooded lead acid) batteries?
3
What happens if you draw too much current from a 12 volt sealed lead acid battery?
0
Why is only one out of 2 batteries is discharging when connected in series?
0
What is the actual capacity & charging current of a given deep cycle lead acid battery?
2
How to find out what level of battery voltage corresponds to 50% discharge?
3
Car battery (lead acid) discharges much, much faster than it charges?