My high and low side gate measurements to GND show a tiny little shoot through spike.

Adding dead time, Zener bypasses over R(g) and from G-S, and TVS diodes does not do anything.

The load is 100K and it's running off 12V supply. Any ideas as to how to get rid of the spike? I'm assuming it's shoot through, but even giving it way more dead time simply just spikes it anyway. It's like it never fully discharges the gate. 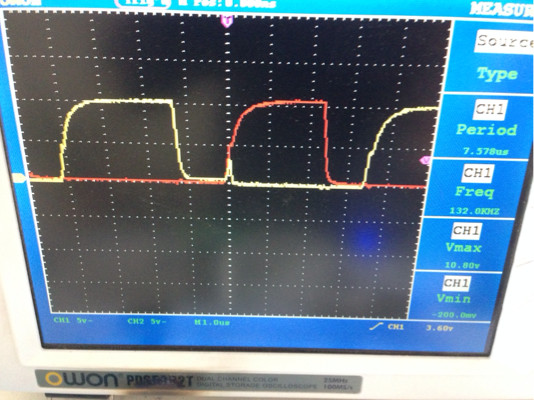 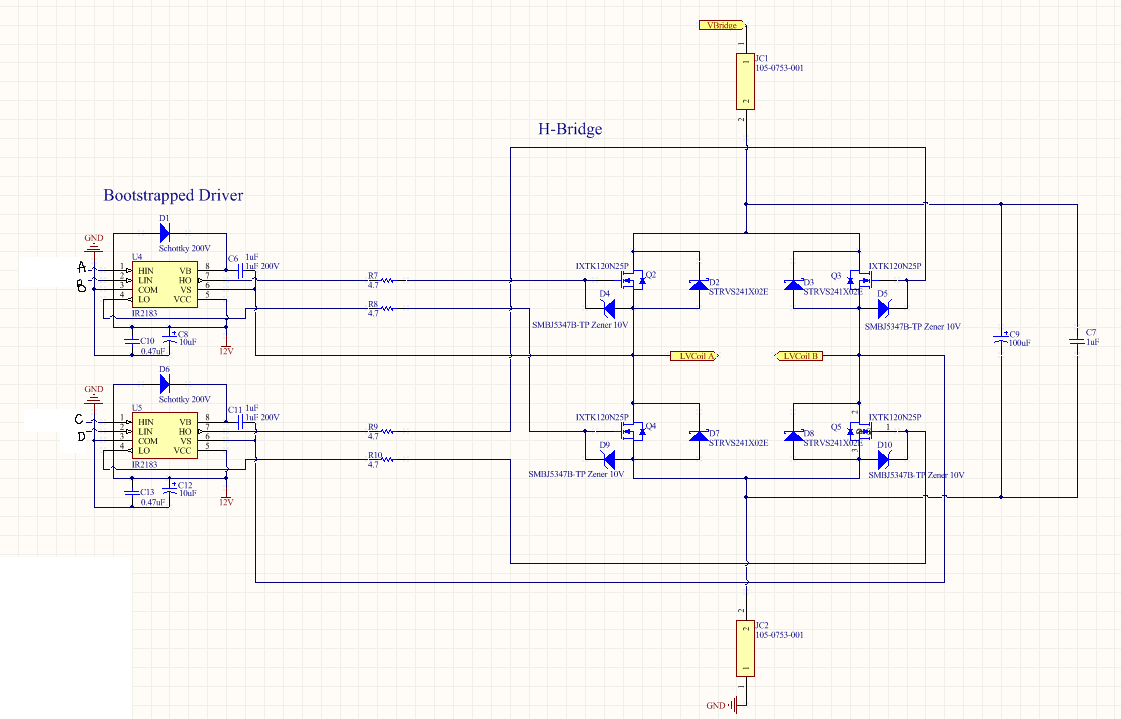 Looks like dV/dt. When for example the lower FET is being held off, but the upper FET is driven on, current will be driven from drain of lower FET through Cgd into Gate. If the gate circuit impedance is high enough, lower FET will be turned on by induced voltage across gate circuit impedance. The impedance will include Rg (like R6, R8, R9, R10) and driver resistance (for IR21xx parts is often ~ 10Ohms) and the rest of gate routing including back to the source. In your circuit it looks like there is a round about path from gate to source on the bottom FETs. Also, looking at the rise time of the gate voltage, there may be too much resistance. Are you sure Rg is only 4.7Ohms? If so, maybe that's too much.

The bloody C8 and C12 were in completely switched sides of the board, and tied, therefore, to the wrong driver, meaning that whenever a driver's low side fired, the charge left on the bypass capacitor was built up on the bootstrap capacitor, and as soon as the 'switch' came, it would discharge the bootstrap momentarily for the wrong cap, meaning you get a spike at the beginning of the wave. At least I think.

The reason the yellow wave is slightly higher DC bias is because the bypass being on the wrong side, and thus, I think, undergoing a bit of hystereses due to the really long trace.

Unfortunately you guys weren't given the actual PCB layout by me, I thought I had it down, but silly mistakes like this will cost you.

Mostly the problem seems to be in IC2. Ground connection is not clean, so just try to remove IC2 and connect solid thick connection between source of bottom MOSFET and gnd. You can use two-three connecting wires for same and will see the difference significantly.

Not the answer you're looking for? Browse other questions tagged mosfet h-bridge or ask your own question.