How come you cannot determine the capacitance of a MOSFET gate based on the other supplied values on the datasheet?

If it's the case that

It must be the case that

But it turns out that it is not. I don't understand what I'm missing.

I know it's something to do with the fact that the actual capacitance a driver charges is not going to be including the \$ Crss \$ and maybe even not include the \$ Coss \$, but that just makes me even more wrong in the equation, so... 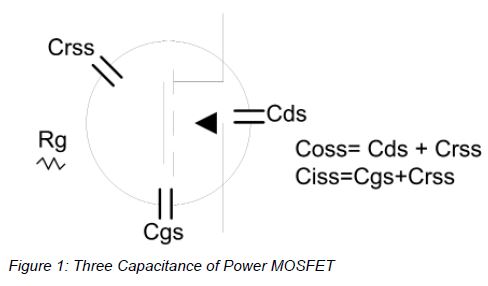 I wanted to calculate the capacitance of the gate with the charge and test voltage so I could check the time it took to turn on and off.

So then I did the following to see if I was doing it right;

What did I miss exactly?

I mean if you just do it to the 185nC you end up with 18.5nF, obviously, but there's no value on the datasheet that indicates that you'd actually be driving that value besides from the 185nC, which apparently you cannot calculate based off of the other values on the sheet. Shouldn't you be able to determine the capacitance you must be charging by taking a look at the input and output capacitances minus the leakage?

You're being confounded by Cgd (same as Crss). Two main points:

So, to get the 185nC number in the datasheet, as shown in Figure 10, you would have to integrate Cdg from 125V to 0V + Vgs-peak, and then add the Cgs contribution.

You're missing that the gate charge is specified at Vd = 0.5Vdss = 125V. The charge on Crss must also be supplied through the gate. I suggest reading this Vishay application note:

The below diagram is taken from there. 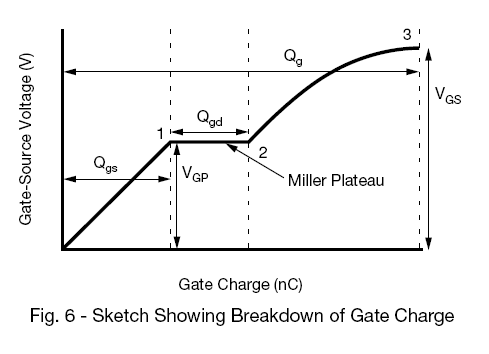 Not the answer you're looking for? Browse other questions tagged mosfet math charge rise-time or ask your own question.

9
Why is the gate charge curve (Miller plateau) of MOSFETs dependent on Vds?
4
Relationship between the gate-charge graph and the Vgs waveform

2
gate current direction during turn-ON of P-channel mosfet
12
Gate Capacitance and Miller Capacitance on the MOSFET
2
Calculating gate resistor value for enhanced active-region stability
6
How is it possible that the reverse transfer capacitance of this FET is so low?
3
MOSFET input capacitance variation with Vgs
0
Does this high side n-ch mosfet bootstrap circuit work?
0
Voltages not what I expect when charging a capacitor with another
1
Calculating the current needed to drive an N-MOSFET