I am doing life cycle test for 7 led's connected in series with current limiting resistor.(picture for reference)

I am measuring light power(mW) with Thorlabs photo resistor for each led. Led's drives from constant voltage supply. After ~ 6 month i see strange results: while 2 led's light power decreased (~5%) other led's light power increased ~4-7%. I don't have the datasheet since this is some custom made module(but i know for sure they have current limiting resistor and the led's connected in series).

Please help to explain and understand these strange results. Will appreciate technical,intuitive and physical explanations.

Relevant: I have personally carried out a large number of LED-years of testing, operating numerous strings of LEDs in series for many months each and monitoring light output change with time.

It is common for LED light output to increase during the early stages of their life, in some cases. What you are seeing is completely usual behaviour.

While Andy's explanation about changing Vf with aging MAY be true and may even be the predominant affect that you are seeing, I would expect that variation in brightness with aging would explain what is being seen.

Factors of relevance to aging include:

If they ar all the same and treated the same way then it would be less usual to see significant differences in aging BUT what you are seeing is within the range of normal.

If they are different products or batches or if some are more exposed to cooling or they are on a heatsink with a temperature gradient, then differences would be expected.

In my testing I used a simple constant current supply per string (using one LM317 and one resistor). This is easy, not very expensive and removes the sort of uncertainty that you now have. All LEDs were nominally identical I also had a reference LED in the string which was shorted during normal operation and allowed to operate during testing. As the string was constant current driven, adding or removing the reference LED made no difference to the operation of the other LEDs but gave a sanity check on current constantness, instrumentation and measurement variations and measurement techniques.

Getting repeatable measurements between LEDs and between sampling periods requires careful design and operation. I made a sampling cone that seated very repeatedly over each LED fixed permanently to a light meter head. The reference LED provided a check on method etc.
Introducing the LED into an averaging sphere would work if you have such. 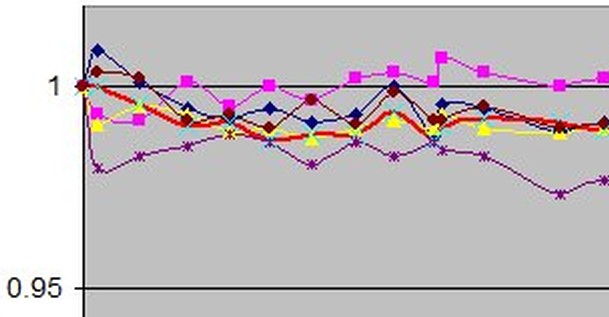 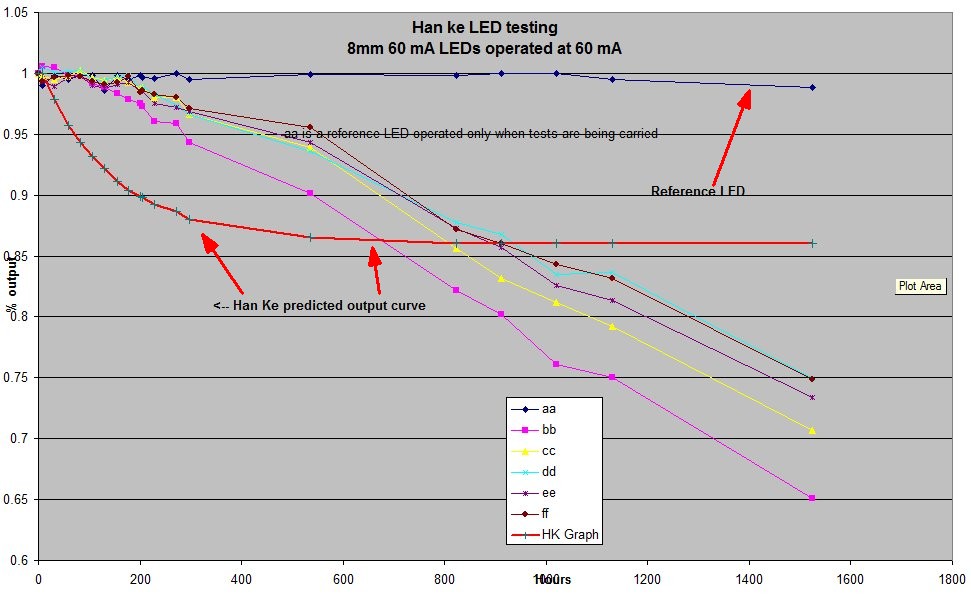 For whatever reason (known only to the deteriorating LED), it develops a lower forward voltage and lowers it's brightness, despite more current. If the LED is slowly dying then who can say why it does this? Maybe some form of increased leakage resistance around the LED is simultaneously lowering its forward voltage and diverting current away from the silicon that generates light? It's just speculation - you cannot expect a definitive reason from the info in your question.

9
How is the fact that the resistor used to limit the LED current dissipates some of energy addressed in lighting applications?
8
How to know how many LEDs can be used at a given voltage
0
9x 1W LED's parallel + series resistor calculation help needed
0
Strange current reading, LED's in series
6
LED intensity changes with time
0
Sixty INDIVIDUALLY on/off switchable COB LEDs connected in parallel: how to drive?
1
Cannot properly power LEDs
0
Impossible current readings while measuring motorbike lamps