Frequency response of a complex circuit

I am interested in finding the impedance as a function of frequency of the \$n^{th}\$ circuit in this series:

(By request: this is intended to be a model of the internal impedance of a battery.)

I've tried simulating this circuit in LTSpice, which worked well. However, I can't easily change \$n\$ that way: I have to manually edit the schematic to increase the number of branches. I want a more general solution, where I can plug in values for \$n, R_1, R_2, R\$, and \$C\$.

Here's an attempt to finding an analytic solution (and how it becomes ugly):

Without any RC (easy)

With one RC (using Z for impedence from now on)

The problem with such circuits is that things are added both in parallel and in row, which is usually not easily simplified.

This becomes a problem in the next step adding a third RC (getting very ugly now). \$R_2\$ is in row, but \$R_1 + X\$ is in parallel (well, partially, at least). At the core of the problem, you have two triangles sharing one edge.

The cool thing (cool as in "makes very ugly things possible, not more beautiful") is that you can convert triangles to stars

Take a look at this image and your schematic:

The goal is to convert the right side (triangle) of the circuit to a star. The image corresponds as follows to your schematic:

After the conversion, the Z is simpler to calculate. To prevent confusion with the indices, I add the term "triangle" to each indice 1,2,3 that is corresponding to thos in the image above.

It should not come as a surprise at this point that \$Z_4\$ won't be any prettier. This is not the way to go if your goal is a formula for \$Z_n\$

I'm a bit rusty on those to say the least, but I hope they are a starting point for you.

It's been way too long since I have solved problems of this kind, but it brings back fond memories. Hence:

For an analytic solution, try drawing this circuit in more of a star configuration and see whether you see anything (handle the R-C combination simply as a complex impedance Z and think of everything as a complex resistance as to not get confused).

See something? If not, try to apply a Y-Δ transform, to see whether you end up with something more palatable.

Still nothing? Kirchhoff is your friend. Kirchhoff's Current Law and Voltage Law will let you state some of the properties of the circuit in equation form. The voltages along any closed loop add up to zero, as do the currents into/out of any node.

The solution is somewhere along this path.

To simulate it, I would hack up a script that takes n as a parameter in addition to R1, R2, R and C and generates the circuit. Then feed it into your simulator. Try a few values of n and look whether anything converges.

I wrote a program to solve this after one of the previous answers convinced me it would work.

(In these schematics, I'm drawing resistors to represent complex impedances. I'm also combining the resistor and capacitor into one block as $$ Z_{RC} = \frac{1}{j\omega C} \big|\big| R $$ .) 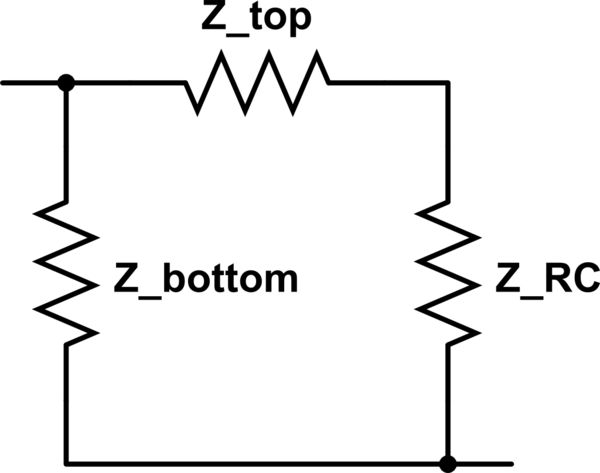 where we can add \$(Z_{top} + Z_{RC}) || Z_{bottom}\$ to the impedance. This procedure seems to be giving me correct numerical answers, but I can't imagine getting a nice symbolic formula out of it.

Not the answer you're looking for? Browse other questions tagged circuit-analysis simulation impedance or ask your own question.

2
Stepped Sine Wave in Spice
4
Transfer functions with constant voltage sources in them?
3
Why can't you divide a series + parallel circuit into branches to get total current?
0
Op-amp voltage divider
3
Output impedance of circuit with ideal op amp
3
I can't derive a differential equation from this complex RLC network
2
How does this impedance matching circuit work? How to simulate it correctly in SPICE?
0
Finding current through an LED in an amplifier using a BJT
3
Analysis of unbalanced bridge circuit