I am trying to use one emergency stop switch to disable two batteries that function in independent circuits. My circuit diagram is attached below. A motor controller connects to each of the exposed wires. Will this circuit work?

If I understand you right, this is your circuit diagram: 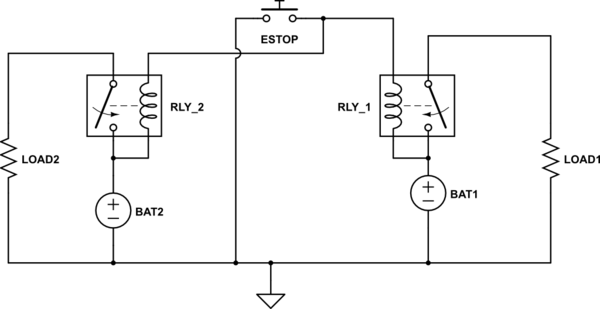 I can see at least one problem here:
If the ESTOP is in open position, there is still a closed circuit GND->BAT2->RLY_2->RLY_1->BAT1->GND. Which is not a problem when BAT1 and BAT2 are EXACTLY same voltage, and canceling each other. But in the world of batteries it is not the case. They can be charged to different levels, or there can be voltage drops due to current spikes (especially with motor applications), so there will be always current in this circuit, which might be enough to close the relays whenever not intended. 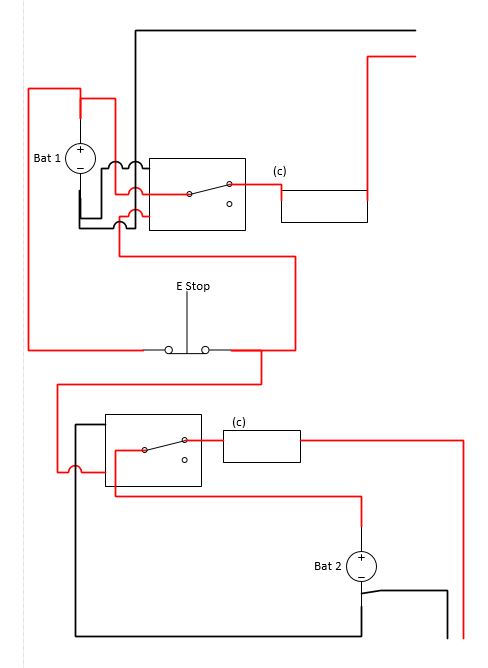 because the estop is basically a switch, when normal it lets the voltage go through, when pushed it disconnects the voltage. this can also be done through the ground to the relays in case you dont want to push your battery voltage into the estop

Eugene's answer is entirely correct, but I'll expand on it by offering another reason why it won't work, or at least why it won't be accepted as a safety function:

Redundancy, or rather, the lack of it.

Unless you have a very good reason otherwise, an E-STOP function is considered to be a last-resort, guaranteed-to-work way of stopping equipment that's about to cause worse damage than it otherwise would by sudden removal of power, either to itself or to the people around it. Therefore, E-STOP's and other safeties need to tolerate parts failing, the most dangerous of which being stuck/welded contacts. They do that from time to time. If a contact sticks/welds, you still want the E-STOP to work so you can get yourself or your buddy out of the machine. (not that you should have been in there with power on, but that's a slightly different issue)

The way to solve that problem is to use two sets of contacts for each possible way to stop the machine because of safety. Wire them so that if any one of them fails to open, it does not prevent any part of the system from stopping. A simplified multi-stage system might look like this: 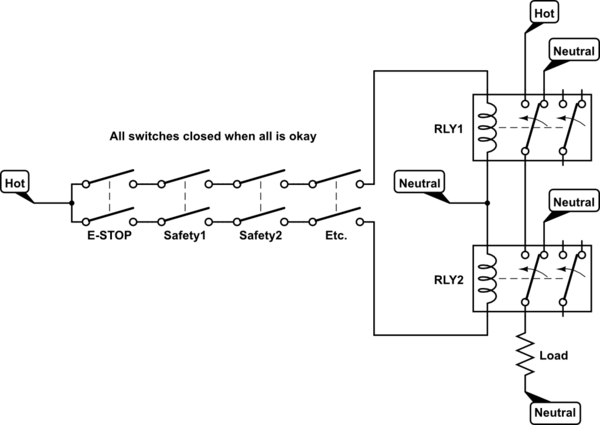 For your application, I'd recommend you use a completely separate copy of this for each battery and connect the respective switches mechanically. That means a 4-pole E-STOP and other safeties. Next best would be to use this for one circuit and switch the other using the extra contacts (make sure they're big enough), but that would require the "master" battery to be good before the "slave" circuit works, which might tempt you to defeat the "slave" system to make it run anyway. DON'T DO THAT!!! :-)

I connected the load to Neutral when off so as to quench any arc that may form because the load is still trying to draw current. Once the contact reaches Neutral, current can flow all it wants in its own little loop and the arc stops, finally removing power. The residual current then dissipates quickly with nothing to sustain it.

The relays' extra contacts can and should be used to monitor the status of the safety circuit, in addition to monitoring the coils' power. This narrows down the search area in case of failure. Just make sure you get a relay that does not allow some contacts to move without others in case of sticking/welding. All must move or none at all.

I used the terms Hot and Neutral even though you're using 12VDC because those terms are really universal. Ground (not shown) carries no current except to trip a fuse or breaker and is therefore safe to touch despite using big enough wire to safely trip the protection device. Neutral connects to Ground AT EXACTLY ONE POINT and carries current back to the power supply, whatever that may be. Hot provides voltage relative to Neutral in whatever format is required by the circuit.

If you want to get fancy, which may or may not be required for your application, you can look at some industrial automation suppliers for a "Safety Relay". That'll take the dual input as shown here and provide the series output as shown here, as well as, if you wire it correctly, some extra interlocking to make it even more safe. Like a separate reset button, and requiring both inputs to open and re-close in unison before powering the load. (basically proof that one of them isn't welded already) 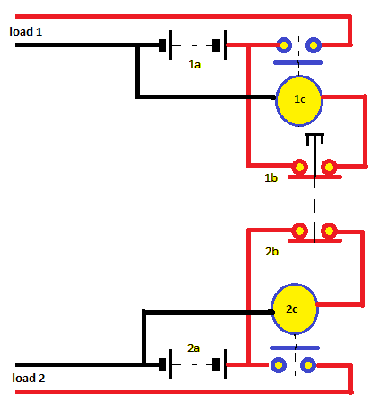 Using two contacts on your button, possibly a stop-lock or stay-put type. You could put protection in for relay coils (big yellow circles) and protection for each load just after positive terminals, assuming negatives earthed.

Not the answer you're looking for? Browse other questions tagged batteries wiring button or ask your own question.

2
If I have three button cells in series, and one of them dies, will the whole circuit still function at a lower voltage or will it stop flowing?
2
Battery Wiring - 3 Independent systems with common ground
0
Power single device from two circuits
0
How to choose connecting wires and switches for a motor-battery set
5
Escape Room Bomb Defusal Wire Cut
0
Can I use 2 CR2032 batteries to power an EL light strip normally powered by 2 AA batteries?
0
Modifying guitar amp to run on batteries, switching between center tapped transformer and batteries with only DPDT switch
0
Battery Pack Design: Charging Parallel 18650s Through a Step Up Converter and BMS
0
Mapping two buttons press as a 3rd button