Control LEDS with PWM and transistors

I have three transistors that are each connected to 5 LEDs like so. 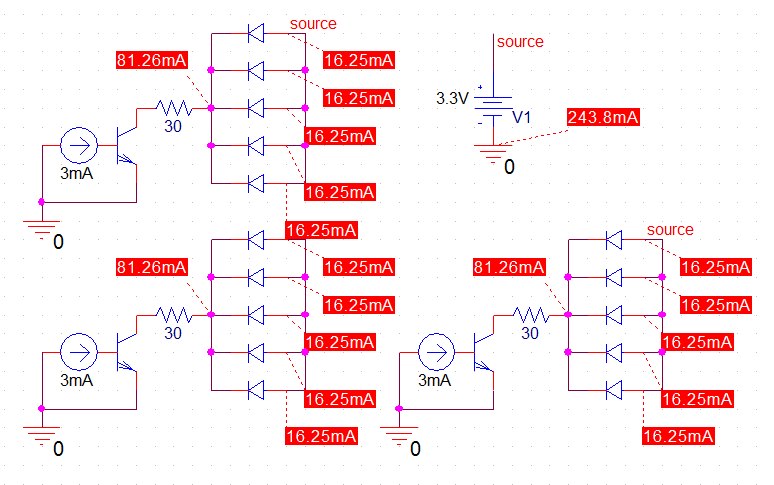 The 3mA sources in my diagram are modeling the pwm outputs of a microcontroller. (Their max current.) I need to control the brightness of the LEDs by changing the duty cycle of each PWM.

I'd rather not have to use a LED driver. I'm also aware of the use of lookup tables to correct the exponential factor. Is that my only option?

Your problem is pretty straightforward. Your current limiting resistor is much too large. If your LEDs are in fact allowing as much current as you assert, the voltage across the resistor will be .08 x 30, or 2.4 volts. This leaves (at most) 0.9 volts across the LEDs, and that is not enough to allow them to produce much light at all.

You should resize your resistor, taking into account the forward voltage (Vf) of the LEDs, to allow maximum current with transistor fully on, and a transistor voltage drop of about 0.1 to 0.2 volts. Either that, or increase your source voltage.

Once you do that, you're still likely to have problems. With 5 LEDs in parallel, whichever one has the smallest Vf will hog current and glow more brightly than the others. In the worst case, this will cause it to get hotter, its Vf will drop, and it will hog even more current and get even brighter. At this worst-case limit, it will draw nearly 5 times as much current as you expect. If this level is too high, the LED may fail open, leaving the process to repeat in turn with the other 4, then the other 3, etc.

Finally, you need to examine the data sheet for your transistor and determine its current gain. This is the hfe which Ignacio referred to his comment. To make life more difficult, gain changes with current level, as you will see if you pay attention to the data sheet. But let's say that the gain is 100, which is a decent starting point for modern NPN signal transistors running at less than 100 mA. Keep in mind that, due to your large limit resistor, the current will never approach the 80 mA you think it will. Let's say 10 mA, just as a start. Then any base current above (10 mA / 100) will make no difference to the LED current, since the transistor is pulling as much current as it can, and the current is limited by the resistor and the LEDs. 10 mA/100 is 0.1 mA, or 3% of your nominal drive, and is entirely consistent with what you see.

In order to check this, fire up your circuit and connect the collector of your transistor to ground. Now measure the voltage across the 30 ohm resistor, and divide by 30, to give your total, maximum current. Divide this by 10 or so to get the base current you need. To understand why you divide by 10 rather than 100, start learning about transistor saturation.

Not the answer you're looking for? Browse other questions tagged microcontroller led pwm or ask your own question.

38
Correcting for non-linear brightness in LEDs when using PWM
8
Why is PWM used to control LEDs even when they're only used On or Off?
1
Brightness control with PWM dimming LED driver LM3406/06HV
1
Control multiple LEDS with one PWM pin?
9
Can bright LEDs cause eye damage even if they are dimmed with PWM?
0
How to control multiple tiny PWM controllers with one "master" MCU; DIY LED array
0
Keeping your LED cool with PWM
0
Effect of changing PWM frequency of a light source on perceived brightness
0
Driving two parallel LEDs with PWM brightness control and an "LED selection" signal
1
Parallel transistors for brightness control of large quantity of LEDs