Can a logic level converter be used as a replacement for a relay for detecting if a buzzer is currently active?

I have a small microcontroller (VoCore, runs Linux, has wifi and GPIOs) and i want to use it to hook into another system (basically a doorbell) to make the state of the doorbell-buzzer available over the network.

The system I want to hook into runs on 8V DC, there is a buzzer in it which normally doesn't get any power, if somebody rings the doorbell it gets 8V. My board runs on 5V with a 3.3V GPIO logic level, so i have a DC-DC converter which transforms the 8V to 5V, that the things i want to connect already share a common ground-level.

I am unsure of how I can hook into / "read" the state of the buzzer-line. It should still work as it does now. I had the following 2 ideas:

So my question is: Is my second assumption true? Can logic level converters be used like relays for "detecting" voltage on some line? Or am I on the wrong track from the start - how is detecting voltage on some line with different voltage than my microcontroller typically done?

how is detecting voltage on some line with different voltage than my microcontroller typically done?

Normally people use an opto-coupler; an LED and photodiode in close proximity sealed into one package: - 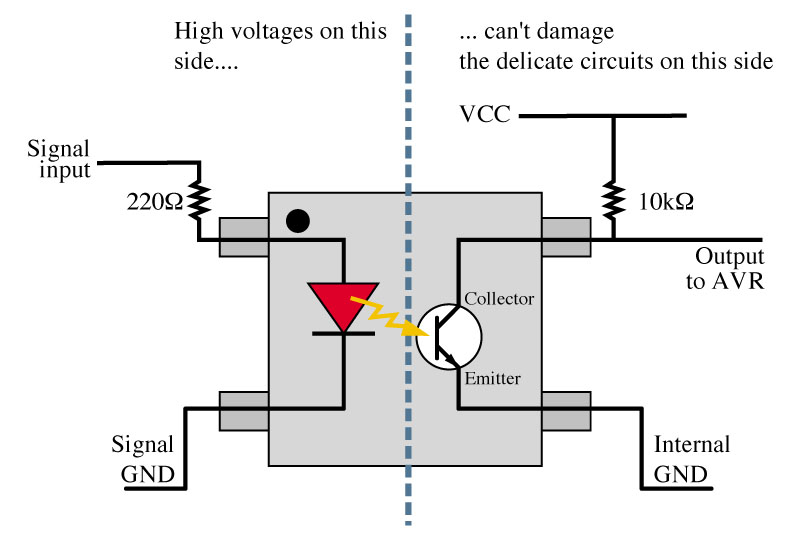 Since the I/O pin input to your microcontroller is pretty high impedance you could simply use a voltage divider as follows to convert the 8V buzzer signal to a 3.3V level suitable for the MCU.

Not the answer you're looking for? Browse other questions tagged microcontroller voltage gpio voltage-detector or ask your own question.

3
Micro-controller - Detect If AC Device Plugged In / Drawing Current from a Relay
1
RxD TxD equivalent pins in USB
2
Using a transistor for interfacing different voltages
0
Using bi-directional logic level shifter for SWD.
1
Problems reading GPIO states set between STM32F Discovery and Nucleo64 boards
2
How do I control the brightness of an LED street light
0
Why does a GPIO pin always return logic low when devices are connected to it?
1
Switching between +9V and -9V (using 5V logic)
1
Selecting Solid State Relay