What is causing this step-up converter circuit to fail when introducing a transistor?

These are the circuits of the project:

I assembled the schematic for viewing this circuit by combining images of the three sources and modifying for existing conditions. 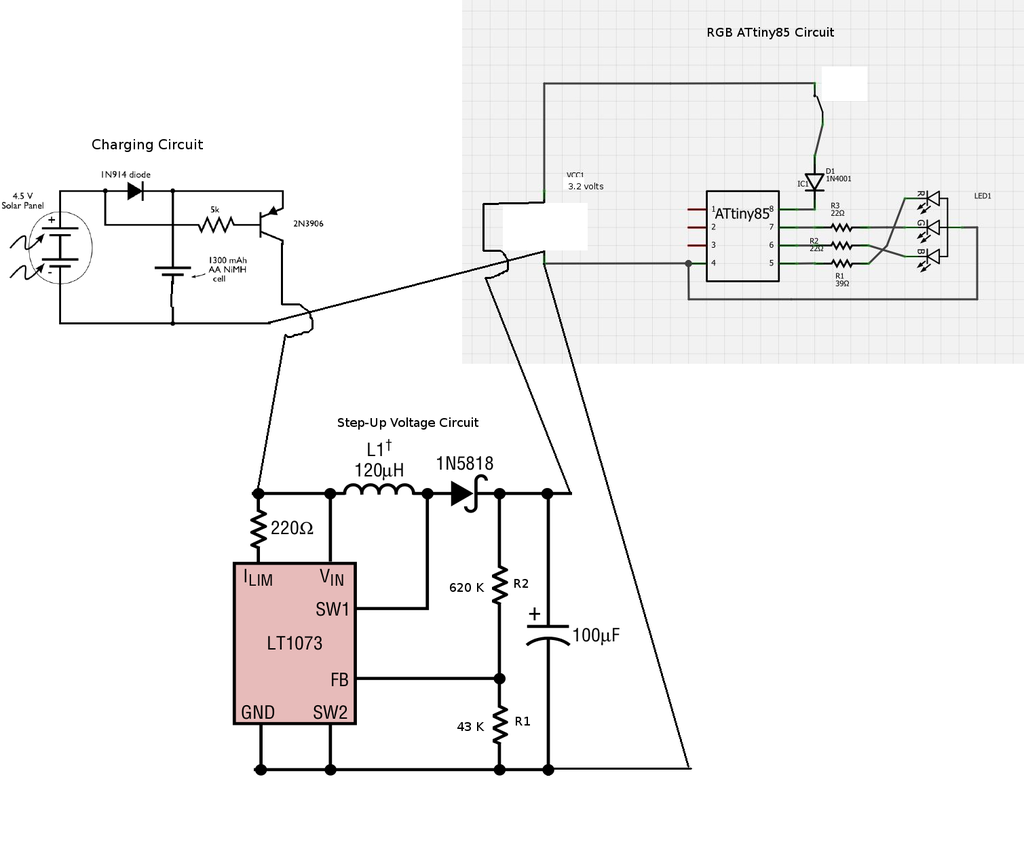 Note that the LT1073 circuit is constructed with carbon film resistors where the LT schematic calls for metal film and also I'm using electrolytic capacitors.

I'm puzzled how the introduction of the 2N3906 transistor has resulted in the circuit to fail.

Your transistor doesn't have enough gain.

Because your SMPS regulator is a boost circuit, it requires more current with its input at 1.2V than your circuit would need if it was running directly from 3 cells (nominal 3.6V).

The combination of low gain and small base current means that the transistor can't turn ON fully.

You can try a couple of things:

1) put a resistor in parallel with the solar panel. You will have to experiment with the value.

The downside of this is that now you are wasting solar energy in this resistor.

2) Use a P-channel low-threshold-voltage MOSFET instead of the transistor. Do a search for a family of MOSFET called "Trench FET" - Digikey has several that are suitable.

You want the Rds-on resistance to be a low as possible and the fully-enhanced gate voltage needs to be lower than 1.2V.

The transistor is permanently off since there is almost no base current possible in such a circuit. It can work only if the "NiMH battery voltage" is higher than "solar panel voltage" by more than \$ V_{BE} \$ (~0.65V). \$ I_B \$ will be then:

From that it is clear that one NiMH cell is practically insufficient for such a circuit to work properly.

If the "solar panel voltage" goes up (i.e. during charging the NiMH battery), the transistor will turn off.

Not the answer you're looking for? Browse other questions tagged troubleshooting or ask your own question.

1
What is causing a loud static POP when PTT mic is keyed?
19
Why would a buck converter IC fail and blow up?
0
LM7805 Voltage Regulator stops working when input voltage increases
3
What is this checkered pattern in Altium when placing tracks?
1
Inconsistent voltage on buck converter (TPS54240)