How exactly does a VGA cable work?

I've been looking around on the internet and I can't find anything in depth on how the cable/connection functions. I've only been able to find simple pin out descriptions.

If someone can link me or point me in the right direction, I would be very grateful.

The OP asked how a VGA cable works, so I'll start with the wiring for a standard cable, which is a DE-15 15-pin connector (sort of like the DB-9 connector used for RS-232, but with an extra row): 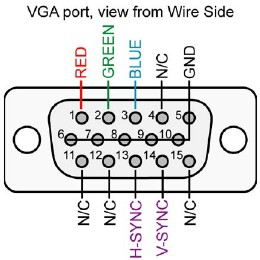 H-SYNC and V-SYNC stand for horizontal and vertical sync. The rest are self-explanatory. H-SYNC and V-SYNC are digital (TTL) level signals, active low, and the color signals are analog, 0v (black) to 0.7v (full color).

As implied by the presence of the H-SYNC and V-SYNC, there is horizontal timing and vertical timing. This diagram shows the timing for 640x480 VGA, which was one of the original VGA formats. 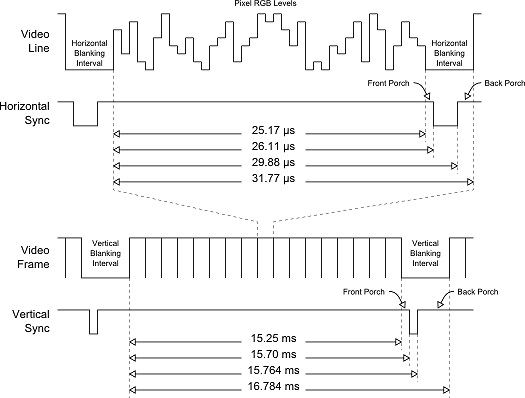 The horizontal timing, shown at the top of the picture above, represents one line of the screen (e.g. 640 visible pixels of a 640x480 display). Between each line of pixel data, there is a horizontal blanking area where no video is shown (this originally was primarily used in TV's to allow the CRT trace to move back from the right side to the left side of the screen, ready for the next line).

The lines are gathered into frames, shown at the bottom of the picture. Like the timing for each line, there is a vertical blanking interval at the beginning of each frame (this originally was primarily used in TV's to allow the CRT trace to move back from the bottom of the screen to the top, ready for the next frame). On some older CRT TV sets, it was possible to "roll" the picture down and actually see this interval as a black bar across the screen. Like the line timing, there is a front porch and back porch area in the timing.

Although 480 lines are displayed, 521 lines are actually needed per frame: 2 for the vertical sync, 29 for the back porch, 480 for the visible lines video, and 10 for the front porch.

Not the answer you're looking for? Browse other questions tagged display vga or ask your own question.